The Federal Ministry for Economic Affairs and Energy is expecting more competition and increased security of supply by modifications in the gas market and the balancing power market. The power generation of renewables recorded a new high in the first half-year of 2017. While climate targets are under consideration, investments in and applications for Blockchain technology are taking shape. The strong prices for coal have especially pushed up the annual base load delivery for 2018.

After a long discussion about the pros and cons of combining the German gas market areas the Federal Government was able to prevail against its critics. The amendment of the Gas Network Access Regulation scheduling a merger of the market areas of Gaspool and NCG until 1st of April 2022 was highly disputed. The Federal Network Agency criticised that such a decision should not be taken without an accurate cost-benefit analysis. While state secretary Baake expects increased security of supply by merging the market areas the federal government was also concerned about a possible scenario, where one of the German market areas is forced to merge with a foreign market area due to EU-regulations. This possibility should be avoided as it might cause a situation in which German gas customers are subject to different regulations and prices (Source: Energate).

More competition is also expected in the balancing power market. The conditions of participation in both the secondary balancing power and the tertiary reserve have been improved. In particular, the participation of renewables, dispatchable consumers and storage capacities should be simplified. Especially the modification of the tender conditions in the secondary balancing power from a weekly tender to one tender per calendar day and the reduction of the product times to four hours are supposed to help integrate renewable energies such as wind and solar into the ancillary services. A deployment decision for balancing power will be possible because of a more detailed forecast facilitated by the shorter lead time. Homann, president of the Federal Network Agency, commented: “Renewable energies should be able to participate in the electricity balancing market to a greater extent”. The most important changes come into force at the 12 July 2018 and are available on the pages of the Federal Network Agency. 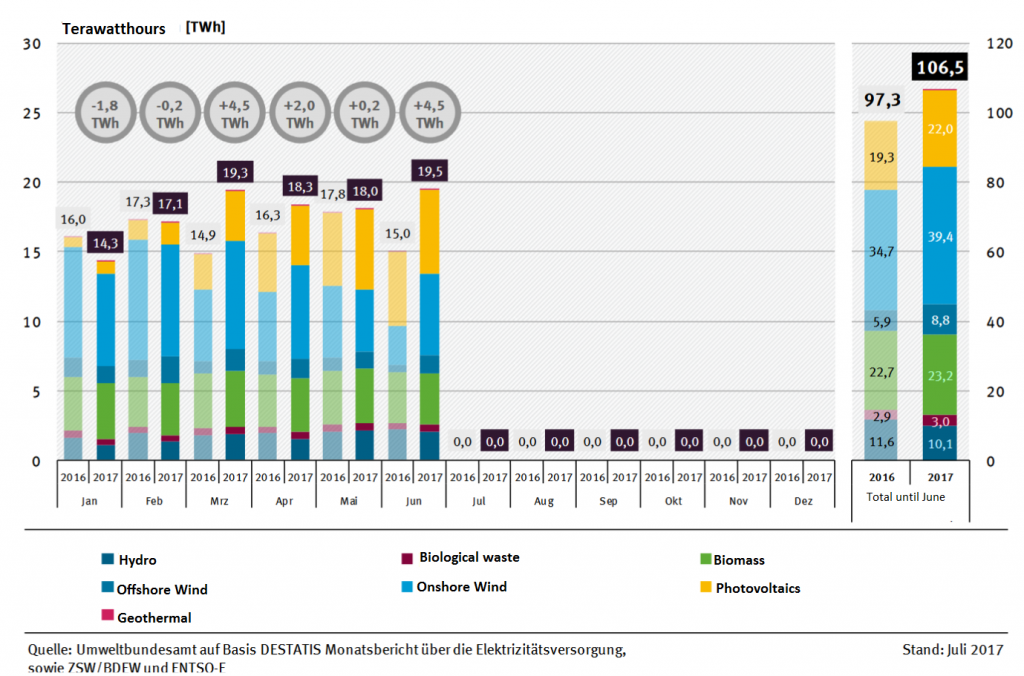 Figure 1: Electricity generation of renewable energies in the first six months in 2017 compared to the previous-year period (Source: Umweltbundesamt)

The governments in North Rhine Westphalia and Brandenburg are impeding the decarbonisation of the power industry and therefore the international obligations connected to climate protection. The reduction targets for CO2-emissions in the federal states rich in lignite resources are in the process of getting defused in order to leave more space for lignite. The current emission limit for Brandenburg of 25 million tons CO2-emissions in 2030 is supposed to increase to 41 million tons (Source: Energate). Chancellor Angela Merkel acknowledged at the same time that the target of reducing greenhouse gas emissions by 40 percent until 2020 requires substantial need for action. The renegotiating of industry specific targets in the coming year will show to what extent this need for action will lead to necessary realisation (Source: Energate).

The announcements about Blockchain-technology during the last months are slowly turning into actual achievements. After the inauguration of two wholesale trading platforms based on Blockchain, the EnerChain of Ponton and the Interbit of BTL, Innogy’s start-up Conjoule collected 4.5 million EUR in order to set up an internet platform for peer-to-peer trading of electricity. “The funds of this investment round will primarily be used for the technical development of the platform through which our customers are able to trade energy”, explains Innogy (Source: Energate). An interesting side note: The Japanese nuclear power plant operator Tepco (Fukushima) is investing 3.5 of the 4.5 million EUR (Source: Gründerszene).

On the pricing side, especially the long-term prices have been changing. The price for the baseload power delivery for 2018 rose to a two-year peak of more than 31.80 EUR/MWh, as depicted in figure 2. In particular, the below-average global availability of hydropower for electricity generation boosted to coal prices in July to more than 73 USD/ton. Because coal-fired power plants set the price in Germany in many hours, coal prices affect the long end directly.

In the short-term market the month of July was characterised by relatively high spot market prices above 35 EUR/MWh, especially by the revision of some power plants in Germany, less wind supply and high electricity demand in France. Figure 3 displays the development of the day-ahead prices in July 2017 up to now.