The EU Commission ratifies the German renewable energy act 2021. Hydrogen also continues to boom, with energy giants planning their hydrogen strategies. The EU’s increased climate target agreed on in April could lead to a tightening of the EU ETS in June. Commodity and CO2-prices continued to rise in April, and strong winds caused negative prices on the spot market during Easter.

As the numerous approvals of German wind farms show, German wind power is currently growing strongly. The German Wind Energy Association (BWE) announced that from January 4 to April 6, 2021, 1,160 MW of new wind turbines were approved in Germany, more than at any time since the first quarter of 2016. Only in March, the approvals amounted to more than 800 MW.

In addition, 506 MW of onshore wind capacity was also newly going online in Germany in the first quarter. This represents a 37 percent increase compared to the same period last year (source: Montel). The renewable expansion will be further strengthened in 2022. Only recently, the federal government published new and higher tender volumes for onshore wind and PV in the upcoming year. As figure 1 shows, the volume for onshore wind power will increase by 1.1 GW to 4 GW, while PV will increase by as much as 4.1 GW to 6 GW (source: Montel). 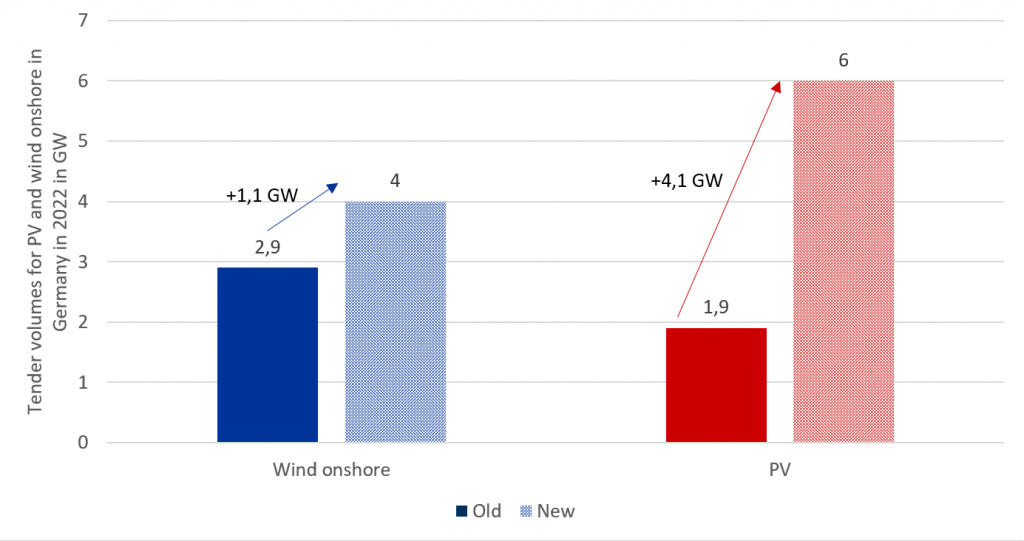 Figure 1: updated and increased tender volumes for renewables in 2022

The Federal Network Agency recently reduced the bidding volume for the next auction round for onshore wind energy on May 1 by 250 MW. This means that only 1243 MW will be put out to tender. Fot the first time, the Federal Network Agency has applied the last amendment to the Renewable Energy Sources Act in the form of so-called exogenous volume control. Basically, this mechanism is used to reduce the tender quantity in the event of a possible oversubscription of the tender. This has to be done at least two weeks before the auction date (source: Montel).

Due to the lack of approval of the EEG 2021 by the EU Commission for a long time, the tender results from the first tender round in Q1 2021 could not be published by the Federal Network Agency . This was caused primarily by insufficient information from German government authorities.

It was not until April 30 that the tender results, which turned out to be very similar to the figures for 2019 and 2020, were then published. Wind power was again significantly undersubscribed – PV, on the other hand, was oversubscribed. The comparison between the tender volumes and the submitted volumes is shown in Figure 2. 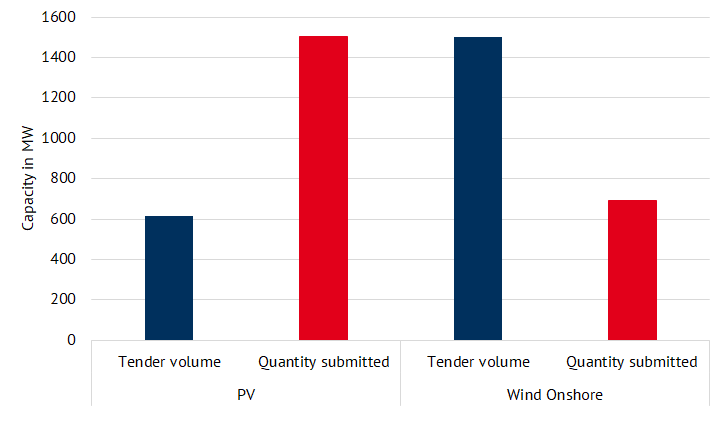 The average tender value for PV was 5.03 ct/kWh, and for wind 6 ct/kWh. The values of the surcharges were thus at a similar level as in previous auction rounds.

The topic of hydrogen is booming and the energy giants also want to secure their share of this growing market.  RWE and Uniper are planning various hydrogen strategies, while government subsidies are also increasing.

RWE’s vision is to trade Australian hydrogen in Europe. For this purpose, RWE Supply & Trading and the Australian project developer “The Hydrogen Utility Ltd” (H2U) have signed a memorandum of understanding under which they intend to bring green hydrogen produced in Australia to Europe. Research is currently underway to determine how affordable green hydrogen can be made available for Germany and Europe, for example through hydrogen derivatives that are easier to transport, such as ammonia and synthetic methane (source: Montel).

Uniper, on the other hand, recently commented on its vision of the so-called “Green Wilhelmshaven”. The energy supplier is currently working on a feasibility study, according to which the port city is to become the hub of the German hydrogen supply with a production of up to 295,000 tons of hydrogen per year. Among other things, this also involves the installation of an import terminal for ammonia with associated “ammonia crackers”, which could represent the first large-scale split plant of this kind for the production of hydrogen.

The German Ministry of Economics and Energy (BMWI) has recently also invested 52 million euros in hydrogen, funding the North German Reallabor. This project, in which the 50 participating companies, states and scientific institutions are investing 300 million EUR over 5 years, aims to couple the industrial, transport and heat supply sectors based on green hydrogen. In doing so, the complete hydrogen value chain is to be mapped (source: Montel).

Tightening of EU ETS due to new climate goals

The adjustment of the EU climate law in mid-April, with an increase in emissions reduction target from 40 per cent to 55 per cent by 2030, could force lawmakers to further tighten the European Emission Trading System (EU ETS) in upcoming negotiations. This could make adjustments to the ETS a key topic of discussion in the “Fit for 55” proposals during negotiations on green policy reforms to be held in June.

Other changes could occur as part of the reduction in allowances freely issued to industry or adjustments to the Market Stability Reserve.

Discussions could also be held in June on the sectoral extension of the EU ETS to sectors such as construction, road transport or even maritime transport (source: EURAKTIV)

With an average temperature of 2 degrees below the norm, April 2021 is the coldest April since 1997, causing commodity prices to rise. Gas consumption in particular, and thus gas prices, were affected. Mid-month, gas prices did fall slightly – presumably due to price corrections after the price had risen sharply – nevertheless, an upward trend in front-year gas continued to be observed at the end of the month due to the persistently low temperatures, as can be seen in Figure 1 (source: Montel).

EUA prices also maintained the positive trend from March and experienced a further significant increase in April. They recently reached another record high of 48.40 EUR/ton. This also had a clear impact on front-year power: at 59.50 EUR/MWh, prices were meanwhile at their highest level since June 17, 2011.

The cool temperatures as well as ongoing concerns about the oil importing country India, which is currently heavily affected by the Corona pandemic, also led to an increase in oil prices in April (source: Montel).

At 51.1 per cent, the share of net electricity generation accounted for by renewables in April was around 10 per cent lower than a year earlier. This was primarily due to unusually cool temperatures and low sunshine hours in early April. Although there was more solar feed-in again at the end of the month, solar feed-in was comparatively low at 6.13 TWh.

This can also be seen in Figure 2, which shows power generation from different technologies and day-ahead prices in April 2021 for Germany.

Wind power, on the other hand, was responsible for much of the renewables share, especially early in the month. During the extreme winds combined with low demand during Easter base load prices fell to a 10-month low. On Easter Monday, the baseload price in the day-ahead auction fell to -17 EUR/MWh, and was even at its lowest level since May 2020, falling so sharply in the hours between 01:00 and 17:00 that prices ranged from -9.47 EUR/MWh to -52.73 EUR/MWh (source: Montel). Overall, wind feed-in in April amounted to 9.67 TWh.

The new German 2030 climate target: Implications for renewables and coal