The new German 2030 climate target: Implications for renewables and coal

The targets of the new climate protection law are ambitious. For example, CO2-emissions from the energy industry must fall to 108 in 2030 instead of 175 million metric tons (Mt) as previously planned. Energy Brainpool’s latest modelling shows that such a reduction can only be achieved with an early coal phase-out. In this article, we take you through the key findings of the calculations.

Among other things, the politicians adopted new sectoral climate protection targets up to 2030, but also specific emission reductions after 2030. In particular, Germany’s greenhouse gas emissions are to be reduced by 65 per cent by 2030 instead of the previous 55 per cent compared with 1990. In doing so, the German government is simultaneously responding to the tightening of climate targets at EU level, which must entail greater commitment on the part of the member states.

In principle, stakeholders have increased the ambitions in all sectors, including transport, buildings, industry and agriculture. However, the energy sector, largely dominated by public power and heat generation, must reduce emissions the strongest by 2030.

After all, as the economy becomes more sector-coupled and electrified, the energy industry is increasingly becoming the main player in reducing emissions in other sectors. Figure 1 depicts the emission reduction pathways of the different sectors until 2030. 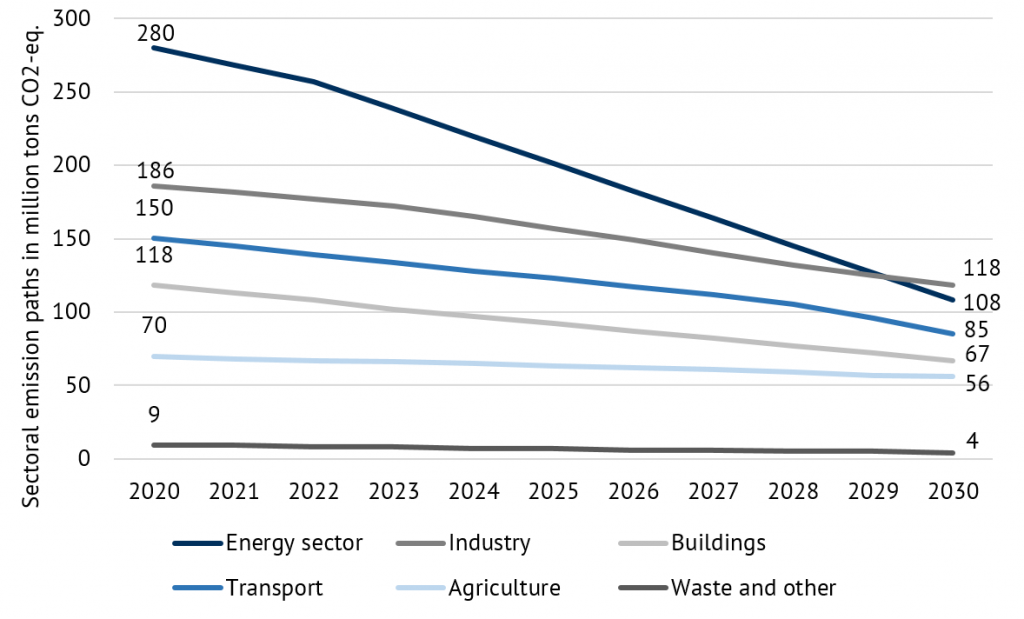 With 108 Mt of energy industry emissions in 2030, the new law means stronger emissions reductions of at least 67 Mt – compared to the previously envisaged target corridor of a maximum of 175 to 183 Mt.

Yet one question has so far been left unanswered: How can the power sector achieve these stronger emissions reductions? To what extent must the power plant fleet for electricity and heat supply be adapted? There is great potential, especially in power generation. We present the results of two possible scenarios for achieving the target below.

If the German government’s previous roadmap for the German electricity market is taken as a basis, the following picture emerges: The coal phase-out will take place by 2038. 17 GW of coal-fired power plant capacity will still be on the market in 2030. In that year the share of renewable energies (RE) in gross electricity consumption is to be 65 per cent.

Electricity demand is expected to increase only moderately compared to today (600 TWh), according to forecasts by the German government. However, most market participants expect demand to increase due to sector coupling. Therefore, we have modelled a moderately increased demand of 680 TWh.

Even assuming rising CO2-prices (70 EUR/t in 2030), calculations with our fundamental electricity market model Power2Sim show: the new climate target of 108 Mt cannot be achieved with this roadmap. The energy industry still emits 160 Mt in 2030.

We have therefore calculated two electricity market scenarios for how the new climate target can be achieved:

In order to achieve the highest possible emission reductions as quickly as possible, it is obvious to start with the most emission-intensive power plants as a first step: If no more lignite were burned for power generation in the entire year 2030 and instead partially replaced by other technology options, annual emissions would already drop to 118 Mt CO2 eq.

The lignite phase-out would thus be brought forward to 2029, while hard coal would not be taken off the grid until 2038. If, in addition, the expansion of wind and solar power plants is stepped up and a RE share of 75 instead of 65 per cent is achieved, the sector target of 108 Mt can be met (scenario “75 % RE, lignite phase-out 2029”).

Alternatively, a complete coal phase-out, i.e., a phase-out of all lignite and hard coal power plants by 2029, would also meet this target (scenario “65% RE, coal phase-out 2029”). Figure 2 shows the emissions of the energy industry in 2030 in the different scenarios. The graphic makes it clear: We cannot avoid a faster coal phase-out. 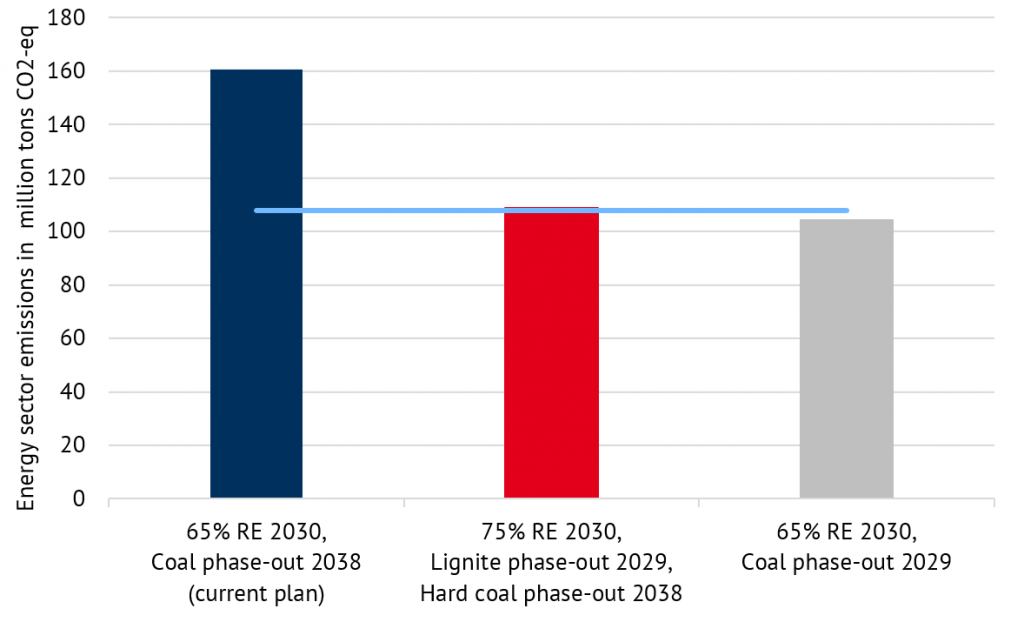 Security of supply in the event of an early coal phase-out: more flexibility needed in the power sector

If the coal phase-out is brought forward in whole or in part, as in the scenarios described above, there will be an increased need for flexibility options on the generation and consumption side.

In the case of an earlier lignite phase-out by the end of 2029, around 11 GW of flexibility from storage, demand-side management (DSM), the grid reserve, or additional gas-fired power plants will be needed – despite electricity import options from neighbouring countries. This is relevant to ensure security of supply in every hour.

With a full coal phase-out by 2029, this flexibility need increases to 16 GW. The above emission calculations are based on the assumption that a about 5 GW will be covered by storage, DSM and grid reserve. The remainder is provided by additional gas-fired power plant capacity in each case.

Since the periods with this increased demand are limited to a few hours in our example scenarios, storage or DSM could play an even greater role here. This would further reduce emissions (from gas-fired power plants). More detailed statements on the extent and type of flexibilities require further investigation.

Figure 3 shows the installed capacity of photovoltaics (PV) and wind energy in 2020 as well as the respective required capacity in 2030 for the two coal phase-out scenarios. In particular, if only the lignite phase-out is taking place earlier, this results in significantly higher expansion targets than previously envisaged. Thus, 10 instead of 7 GW of PV, 1.7 instead of 1.2 GW of offshore wind, and 4.1 instead of 2.9 GW of onshore wind would have to be added annually on a net basis by 2030 to achieve the energy sector target. 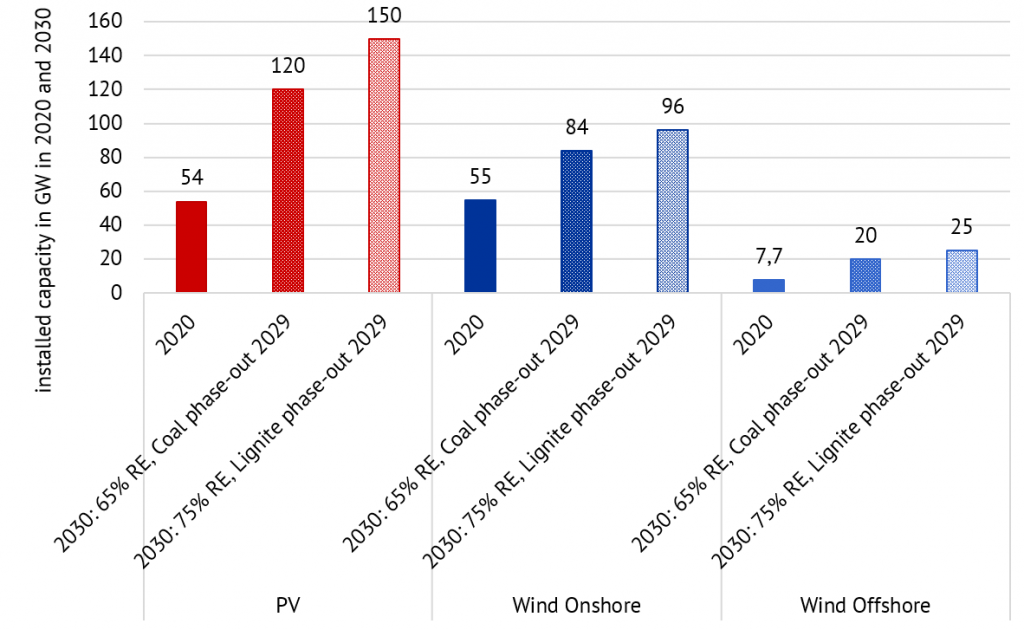 Figure 3: installed capacity of photovoltaic (PV), onshore wind, and offshore wind in 2020 and in 2030 per scenario in GW (source: Energy Brainpool).

However, a stronger RE expansion without the simultaneous market ramp-up of storage technologies in 2030 has only a limited impact on direct emission reductions in the power sector. This is because during the periods when wind and solar are producing electricity, there will be less and less residual fossil-fuel electricity generation left in the future that could be displaced by even more wind and solar additions.

Instead, these surpluses will increasingly be used in other sectors (for example, transportation, hydrogen production, heat supply) or exported to displace fossil fuel power producers in neighbouring countries. While the location or sector of emissions reduction is not important for the climate, it is very important for achieving sector-specific, national climate targets.

However, if storage technologies are used to “push” electricity to other time windows, the emission reduction potential of renewables in the power sector can be exploited in a much better manner.

One development plays an important role here for climate protection: the increase in electricity demand due to new consumers in the course of sector coupling with transport, industry and buildings. In both scenarios, we assume gross electricity consumption of around 680 TWh in 2030. Around 60 TWh of this is accounted for flexible consumers such as electromobility, heat pumps and hydrogen electrolysers.

These assumptions are essentially based on the 2030 network development plan of the Federal Network Agency. However, they are considered being too low by many industry players. If sector coupling takes place more quickly, more additional RE capacity will be needed to the same extent in order to meet the new demand with as little CO2 as possible. The role of RE plants will thus change in the future from displacing fossil generators in the electricity sector to becoming an enabler of emission savings in coupled sectors.

In this context, the more flexibly these consumers manage their electricity purchases, the more they can focus them on hours with high RE shares in the power grid. Due to the merit order effect of renewable energies, these hours are the cheapest on the electricity market. As a result, flexible consumers benefit particularly strongly from increased RE shares. Thus ambitious RE additions provide particularly strong support for emissions reductions in the buildings, transport, and industry sectors, which are increasingly coupled to the electricity market.

Example: Compared to the full coal phase-out scenario, which has lower total energy sector emissions (104 vs. 108 Mt), the CO2 intensity of electricity purchases from electrolysers decreases by 6 per cent to 0.065 t CO2/MWh in the scenario with 75 per cent RE share and only accelerated lignite phase-out. 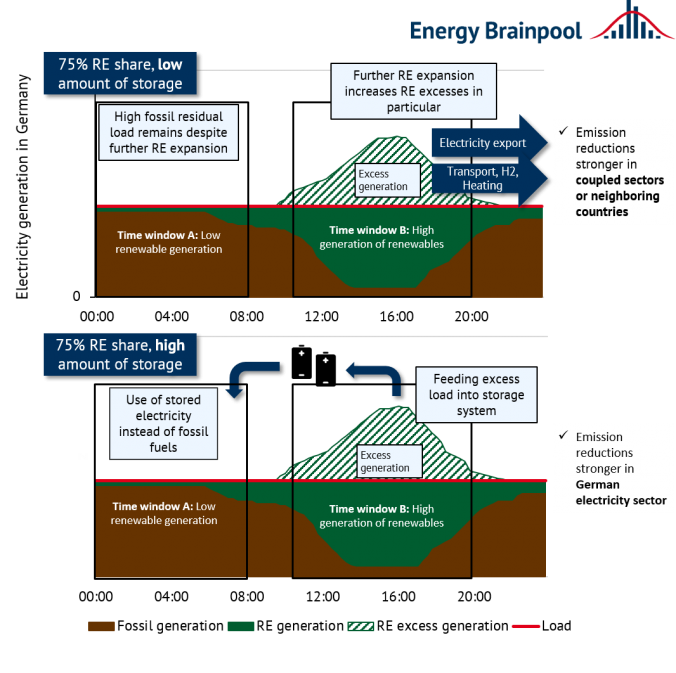 Figure 4: Emission reduction effects of further RE expansion at high RE market shares with and without extensive market ramp-up of electricity storage (source: Energy Brainpool).

With our latest modelling, we show options for a path to a climate-compatible energy system. Feel free to contact us if you have further questions or want to analyse detailed issues. We hope our analysis helps to decide on an effective policy to reach the new climate targets by 2030.

What is next for the European emissions trading system (EU ETS)? Part I