The third round of tendering for wind energy, with surcharges of less than 4 cents/ kWh wasn’t a major surprise. Still, it caused the intervention of the Federal Network Agency for the tenders in 2018. The applications of Blockchain in the energy sector are becoming more diverse, while the prices at the long end of the curve have calmed down again. Read all about the developments in the energy market in November 2017.

The low extra value in the tender for wind on shore from the beginning of November 2017 was not a huge surprise in itself. Projects of citizen energy companies were still exempted from submitting a permit according to the German Federal Immission Control Act (BImschG). The average volume-weighted tender value of 3.82 ct/kWh nevertheless reached a new low for Germany. Since the first tender in May 2017, the volume-weighted tender value dropped by almost 2 cents/kWh. One more time, “citizen energy companies” of professional project developers were successful with 98 per cent of the winning projects. The entire tender has been over-subscribed about 2,5 times. Here, you can also read the analysis of how the tender projects could potentially refinance themselves via rising electricity prices.

After wind tender in November 2017: The Federal Network Agency intervenes in rules

The maximum permitted tender value for the tenders in 2018 is based on the 8 per cent increase in the bid value of the highest bid of each of the last three tender dates. This would amount to a maximum bid of only 5 ct/kWh with the tender prices in 2017. In response, the Federal Network Agency felt compelled to intervene. The responsible authority for the tenders has set a new maximum value of 6.3 ct/kWh according to §85a (1) EEG (German Renewable Energy Law). The precise justification of the Federal Network Agency for this step can be found here (in German only). A graphic illustration of the tender results is shown in figure 1. 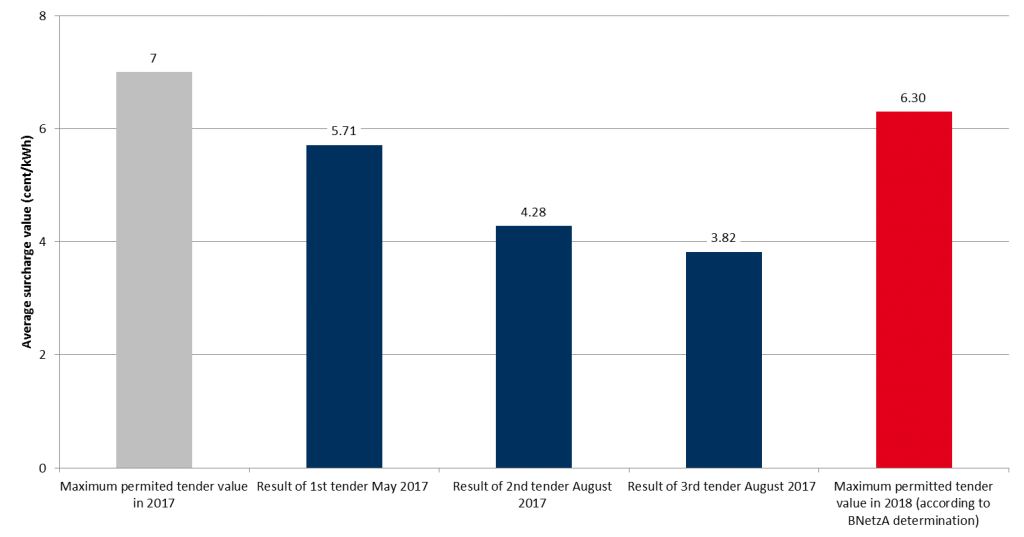 Figure 1: Maximum permitted tender values for 2017 and 2018, as well as tender results for wind onshore in 2017 (source: Energy Brainpool)

In addition to Allgäuer Überlandwerke, which have set up a neighborhood trade on the Blockchain basis at the end of October, Stadtwerke Wuppertal, in cooperation with the Swiss Axpo, is also doing research on a Blockchain trading center for green electricity.  “The concept has the power to revolutionize electricity distribution”, reveals Andreas Feicht, CEO of Stadtwerke Wuppertal. On the marketplace “Tal. Markt”, customers are able to buy their electricity from local green electricity providers and compile their own electricity mix. The cooperation partners see great potential for those marketplaces, in particular, with the expiry of the EEG support for renewable electricity generators from the 21st year of operation (from 2021 onwards).. So far, approximately 80.000 Euros have been invested in the project, which is also scalable with a private Blockchain from Axpo (Source: Bizz Energy ).

In several pilot projects on peer-to-peer wholesale, Austrian utilities are also testing Blockchain technology. Therefore Verbund AG, Salzburg AG and Wien Energy have started to run some Blockchain projects. The utilities are facing big changes in their business models. “The energy future is decentraliced and it is digital,” declares Salzburg AG’s CEO Leonhard Schitter to these engagements.

Rüdiger Winkler from the Federal Association of the Energy Market & Communication, who has launched an industry initiative to implement Blockchain solutions, agrees. “Blockchain is the technology that is going to have the strongest impact on the energy market in the upcoming decades. In our expectation, it will spread very fast”, Winkler said in an interview with Energate.

Until the end of October 2017, electricity prices for long-term deliveries rose sharply. For instance, from July to October 2017, the prices for the delivery of base load in the year 2018 at EEX increased by 5 to 6 EUR/MWh, or 15 to 20 per cent. In November 2017, however, this trend was broken for the first time again. An in-depth analysis of the price development can be found here (in German).

The price decline from 38 EUR/MWh (beginning of November) to 35.5 EUR/MWh (end of November) for the delivery year 2020 is mainly due to the coalition negotiations between the Union, FDP and the Greens. Therefore, the plans for a German coal exit are put on ice for now.

The spot day-ahead market was characterised by low-wind and heavy-wind days (Figure 3). The resulting electricity prices in the day-ahead auctions are also plotted and rose to a 10-month high baseload with a wind slump for 29th of November 2017 to 71.5 EUR/MWh. The most expensive hour fell to 18 o’clock and almost settled at 118.5 EUR/MWh. This was mainly caused by the link with France and the high consumption of the German neighbor at this time.

Coal exit Germany – Decommissioning of over 16 GW by 2020 possible

Autumn highs on the electricity markets- is this the turnaround?