In the past few months, new record levels for electric car registrations have been recorded. What exactly this development looked like, what effects the new emissions reform will have on e-mobility and whether more charging stations or more e-cars are needed to achieve the goals of the federal government. All of this is explained in this article.

This year, more electric vehicles than ever before were registered in Germany. This trend has been observed since the beginning of the year. But the outbreak of the corona pandemic led to a brief decline in new registrations (source: electrive).

New registrations in 2020 at a record high

As can be seen in Figure 1, new record values ​​have occurred almost every month since July 2020. 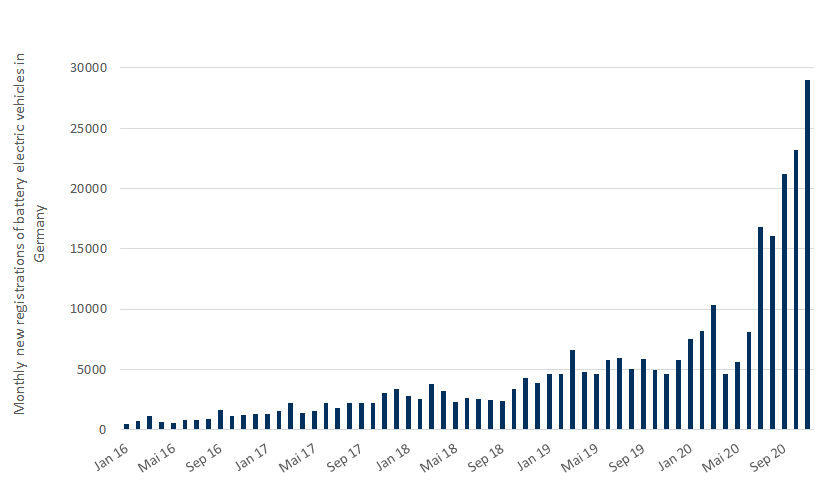 Most recently, 28,965 all-electric vehicles were registered in November 2020. However, until now only around four per cent of all new registrations were purely electric vehicles. These developments are discussed in detail in our blog post from August 2020. It is interesting that data from the Federal Motor Transport Authority (KBA) shows that all brands have recorded a decrease in new registrations of around 3 to 70 per cent compared to the period from January to November 2019.

The only exception to this is Tesla with an increase of 37.2 per cent. This difference can be explained by the fact that only Tesla offers all-electric vehicles. The other vehicle manufacturers had to accept losses in normal business due to the corona pandemic.

BMW is also reacting to this recognisable major trend in e-mobility: In the future, the Munich location will focus on the assembly of electric vehicles. A new assembly plant for this will go into operation by 2026. Every German plant should also produce at least one fully electric car by mid-2022. Table 1 shows which BMW plant should manufacture which model in the future. The production of diesel and gasoline engines will be relocated from Germany to Austria and Great Britain in the future.

Table 1: BMW manufacturing plants and models to be assembled there in the future

To this end, the rules for testing are to be tightened. The temperature range in which the values ​​must be adhered to increases, at the same time there is no cold start bonus and no more altitude restrictions. In addition, urban traffic scenarios such as short distances and stop-and-go will also be part of the test. The limit values ​​must now also be delivered over 240,000 km. Finally, there should be no more measurement tolerances.

Some interpret the recommended, strongly tightened rules for combustion engines as a mortal blow. Some argue that the technical feasibility is clearly given: Some cars already undercut the 30 mg mark today. It is however certain that stricter standards and the associated high research and development costs can make electric cars more competitive compared to combustion engines.

Charging stations and electric cars: a chicken and egg problem?

In the past five years, the number of public charging stations in Germany has increased significantly more than fivefold to over 33,100 (source: electrive). This can be clearly seen in Figure 2. 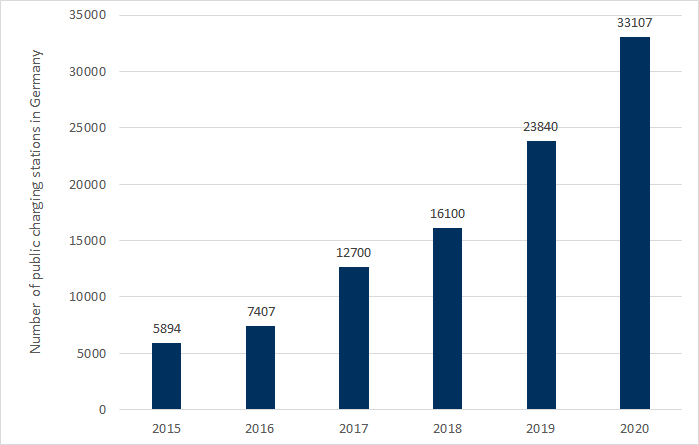 Figure 2: Number of public charging stations in Germany from 2015 to 2020 (source: Energy Brainpool)

In the last six months alone, around 5,300 charging stations have been added, an increase of 19 per cent. In the past year, electric cars have grown by over 360 per cent, so that there are currently 240,000 purely electric vehicles and another 200,000 plug-in hybrids on German roads. Despite this strong growth on both sides, the goals formulated by the federal government are still a long way off.

By 2030, there should be 1 million public charging points and 10 million electric cars. A ratio of 1:10, which is considered ideal. The ratio is currently around 1:13, and the trend is rising. A study commissioned by the Federal Ministry of Transport reveals similar dimensions. It is assumed that there will be up to 14.8 million electric cars by 2030, which, depending on the scenario and the proportion of fast charging stations, would require 440,000 – 843,000 charging stations.

In order to achieve the goal of the federal government, there would currently have to be an increase of 2000 new charging points per week. We are still a long way from that.

Billion package for the automotive industry

The automotive industry received generous support in the current Corona crisis. In June 2020, in addition to a 2 billion package for the supplier industry, it was decided to double the purchase premium for electric cars and hybrids, which had a clear impact. Now, at the auto summit in November, another 3 billion euro economic stimulus package was put together. One billion each is earmarked for incentives to buy e-cars, scrapping programs for old trucks and for future funds. Although a large part of the aids is intended for e-mobility, some of the aids are also aimed at combustion engines.

If the current registration level remains at almost 29,000 electric cars per month, it will take around 28 years for 10 million electric cars to be on German roads. This would be 20 years more than targeted. It therefore seems unrealistic that the federal government’s goals can be achieved without further funding. A study by Deloitte calculated that by 2030 it is more likely to be 6.35 million, almost 4 million less (source: Deloitte).

It is clear that the trend towards e-mobility has now also been recognized by German vehicle manufacturers and the placement of new models will increase over the next few years. However, the coordinated expansion of the charging infrastructure and other state subsidies will likely continue to play a major role in the conversion of motorized passenger transport.