A new dawn in the energy sector? What the new German coalition is planning

High prices on the energy markets have been the hot topic in recent weeks. However, the long-term development of the German energy industry will be shaped much more by the coalition negotiations currently taking place between the Social Democrats (SPD), the Greens and the Liberals (FDP). In this article, we present the initial results and potential points of conflict of the energy and climate policy agenda of the future German government.

The current state of the German climate protection and the energy transition can be inferred from the Climate Protection Report 2021. It was approved by the German Cabinet on 3rd November 2021, after a delay, and contains the expected greenhouse gas reductions from measures adopted by mid-2020.

Despite the coal phase-out law and the introduction of national emissions trading for the heating and transport sectors, Germany would miss its climate targets without further efforts. At a CO2 price of 60 EUR/ton in the European emissions trading system, only a 51 percent reduction in greenhouse gas emissions by 2030 would be achievable.

Under pressure from a ruling by the German Constitutional Court in spring 2021, the Great Coalition of Germany has tightened the Climate Protection Law as one of its last energy and climate policy accents: a mandatory reduction of greenhouse gas emissions by 65 percent until 2030. However, the new coalition of SPD, the Greens and the FDP (also called “traffic light coalition” due to the colors of the respective parties involved) must manage the implementation of the new targets.

The energy and climate policy targets cannot be achieved without a dramatic expansion of renewable energies. In their exploratory paper from mid-October 2021, the three coalition parties set themselves overarching goals in the area of renewable expansion:

The designation of new areas for onshore wind farms offers some potential for conflict. Two percent of the federal territory is required as land area for the necessary expansion of wind energy. The most recent report of the Federal-State Cooperation Committee from the end of October 2021 shows that nationwide only under one percent of the area is currently legally designated for wind energy.

So far, only a few German states have achieved high designation values. In contrast, Bavaria, Baden-Wuerttemberg, Saxony, Thuringia and North Rhine-Westphalia in particular have landed at well below one percent in some cases. Disputes between the federal states about the designation of areas are inevitable here. Figure 1 shows the designated areas (some numbers include not yet completed regional planning processes) of the federal states in relation to their land area. 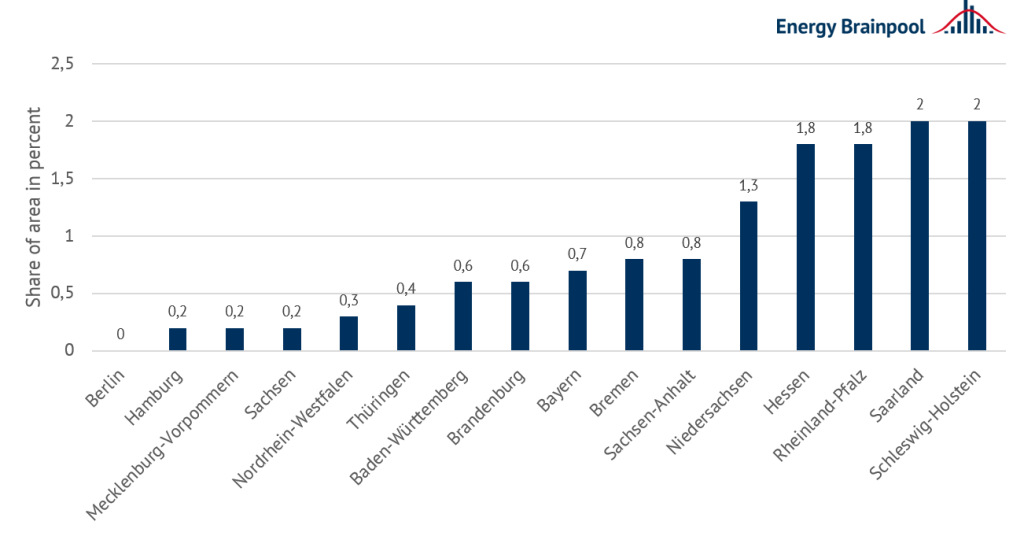 Furthermore, the new coalition in the federal government is aiming for an accelerated coal phase-out, ideally by 2030, as stated in the exploratory paper. To this end, the first review of the coal phase-out law is to take place in this legislative period and not in 2026. The massive expansion of renewable energies and also new gas-fired power plants are mentioned as prerequisites for an earlier phase-out. The latter should already be hydrogen-ready.

An earlier coal phase-out is also likely to lead to conflicts between the affected federal states, the national government, as well as trade unions and the operators of the coal-fired power plants. The coalition parties are therefore also proposing earlier or accelerated financial measures for the affected regions. 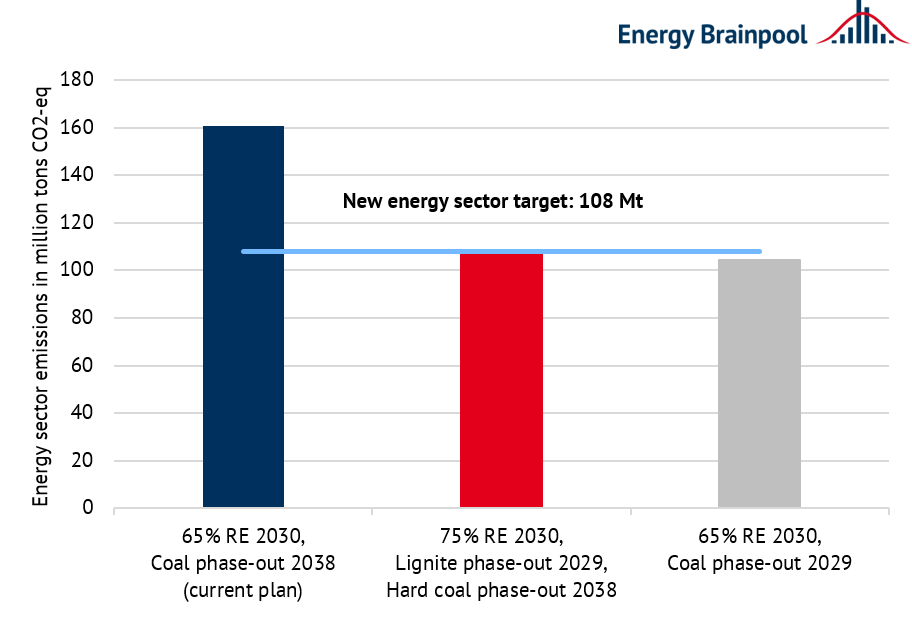 Figure 2: energy industry emissions in 2030 according to different scenarios in million tons of CO2; RE: Renewable Energy (source: Energy Brainpool, 2021)

If CO2 certificate prices continue to rise due to the tightening of the European emissions trading, some of the coal-fired power plants could leave the electricity market for economic reasons only.

Another important point in the exploratory package is the end of EEG surcharge financing via the electricity price. This common way of refinancing the feed-in tariffs for renewables is to be ended as quickly as possible. According to the calculations of the transmission system operators, the EEG surcharge for 2022 is already 43 percent lower than in 2021, at just 3.723 ct/kWh, the lowest level in over ten years.

The high electricity prices and thus the increased market values of renewable energies this summer and fall play a major role here. Figure 3 shows the development of the EEG surcharge since 2011. 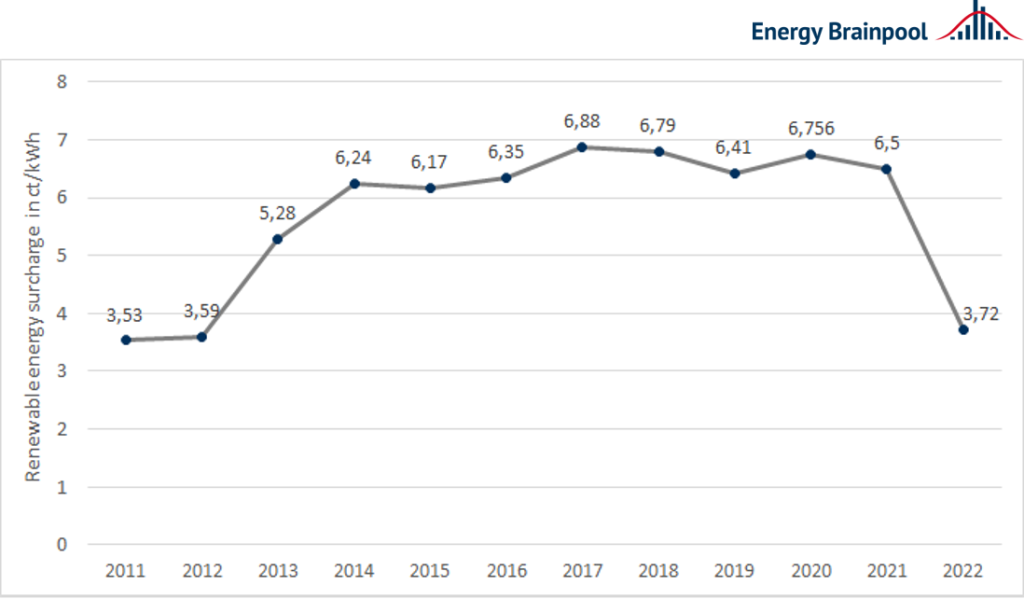 Further financing of the EEG surcharge is expected to be provided in part by revenues from the national emissions trading system (nEHS). This is also to be adapted to the requirements of the European Fit for 55 package. This makes higher prices for certificates in the EHS more likely.

The development of a new electricity market design in the course of the expansion of renewable energies is also mentioned in the exploratory paper. However, the coalition parties do not provide more specifics here. Different studies calculate that a necessary additional capacity of 15-25 GW of gas-fired power plants is required by 2030. So far, however, it is not yet clear how the expansion of secured capacity, i. e. of gas-fired power plants, is to be carried out by the market.

Thus, the development of a new electricity market design could mean the introduction of a capacity market, or just changes in the remuneration of renewable energies and their further introduction into an unsubsidized system through PPAs.

On this point, too, there are likely to be conflicts between the coalition parties regarding the exact design of the new system. At the same time, the EU Commission always has a say in this matter as well.

Positive outlook for the energy industry

The transformation of the energy industry will accelerate in the coming years. The Climate Protection Law from summer 2021 in Germany, the new regulations in the EU’s Fit-for-55 package, rising CO2 prices and possibly high energy prices are some of the drivers.

With regard to the results of the coalition negotiations so far, the energy industry has expressed mainly positive views. If the new coalition of SPD, Greens and FDP succeeds in awakening politics and business at all levels from the slumber of the energy and climate policies of recent years, Germany could actually become a pioneer in the expansion of renewables and climate protection again by 2030.

Record prices on the electricity market: RE market values now hedged on the futures market?