In a new study commissioned by EWS Elektrizitätswerke Schönau eG, we have investigated how fully exploiting the potential for adding small-scale PV systems by 2030 would affect climate targets and the power market. How large is this potential? What measures need to be added to the current EEG Amendment in order to exploit this potential? Read more about it in this blog post.

If Germany wants to make its contribution to achieving the goals of the Paris Climate Agreement, it must become climate neutral by 2050 at the latest. On the way there, it is important to achieve the milestones of the National Climate Protection Plan. For the energy industry, this means that Renewable Energies (RE) are to be expanded to a share of 65 percent of gross electricity consumption by 2030. With this target achievement, the sector’s annual greenhouse gas emissions fall to between 175 and 183 Mt CO2 equivalents.

However, a lack of political determination, approval backlogs and project-related acceptance problems are significantly delaying the expansion of RE. Thus,  the achievement of the 2030 targets is heavily jeopardised . An ambitious expansion of building-integrated photovoltaic (PV) small-scale systems below 100 kW can be part of the solution here. This would allow citizens to participate more strongly in the energy transition again. And, the expansion of RE capacities would be possible with less additional land consumption. Germany’s cities in particular could make an essential contribution to the energy transition, which would also be more consumption-oriented.

Figure 1 shows that not all potential is the same. While the theoretical potential merely indicates “how much sun shines on Germany’s roofs”, the technical potential also takes into account framework conditions such as roof characteristics (type, inclination, orientation, statics) or competing uses (solar thermal). 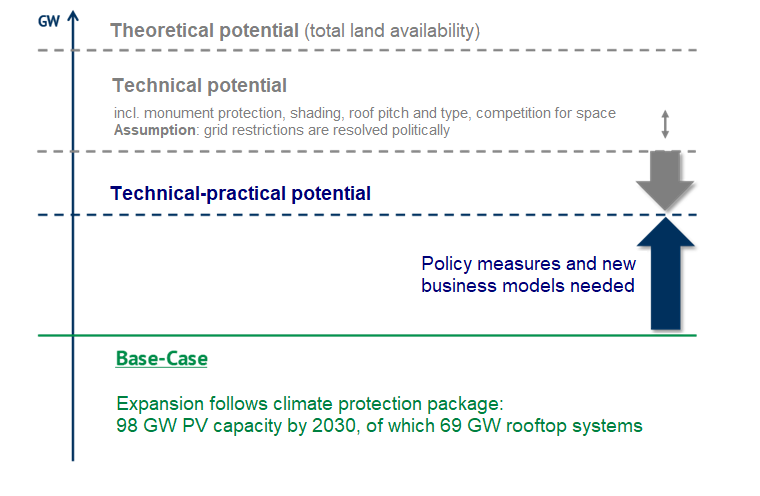 Figure 1: Differentiation of expansion potentials in the context of the EWS Study (Source: Energy Brainpool)

In practice, however, there are other limitations that make it difficult to build PV systems on all technically available roof surfaces. These include roof renovations, which are due by 2030, or the age of some private house (roof) owners – in advanced seniority, an investment with a payback period of 15 to 20 years may sometimes not be made.

Other practical challenges that exist today concern the economic viability of an investment or the prevailing ownership structure. These include for example a lack of regulatory incentive for self-consumption in the case of personal inequality between PV electricity consumers and roof owners. However, politics and the market can work together to improve the framework conditions so that these challenges can be overcome and the resulting roof potential can be utilised.

This results in a small-scale PV system potential of 140 GW by 2030, based on the calculations of the technical potential by Quaschning (2000) [1] and taking only insurmountable practical limitations into account.

By way of comparison, if the German government’s target of 100 GW of PV installations is achieved by 2030 and the small-scale share remains at around 70 % as it is today, the installed capacity of small-scale systems would be around 70 GW. However, at 140 GW, the potential is 70 GW higher.

Power market in 2030: the effect of 70 GW of additional small-scale PV installations

This is how these additional 70 GW will affect the power market in 2030: 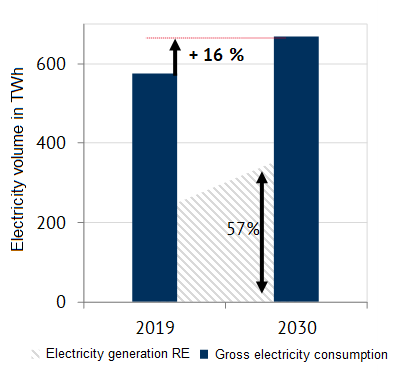 A brief explanation of the “green electricity gap”: It results from the assumption that the expansion targets of the climate protection package will be achieved in 2030 and that total electricity demand will increase to around 670 TWh.

Compared to 2019, this is an increase of 16 percent. This is mainly due to the increasing demand for electricity from other sectors (e.g. transport, heating or hydrogen industry). For 2030, however, the German government assumes a GBSV at the current level (below 600 TWh).

Under this assumption, the current expansion targets for wind and solar are sufficient to achieve a 65 percent share of RE. However, with an increased demand development, there is a risk of a gap in achieving the green electricity target if the expansion targets were not to be raised (cf. Figure 2).

Our modelling shows that the exploitation of the potential of small-scale PV plants alone could close this gap.

How could such an expansion be achieved by 2030?

In order to fully exploit the potential of small-scale PV systems by 2030, an ambitious expansion path is necessary (cf. Figure 3). This cannot be achieved with the help of the EEG Amendment currently under discussion. Instead, additional impulses from politics are needed. 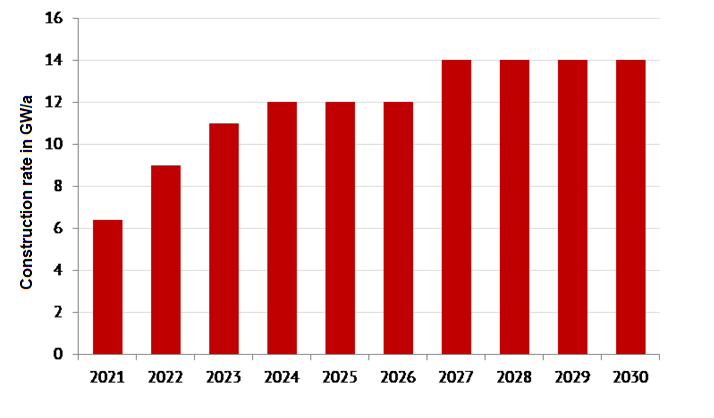 Figure 3: Sketch of the PV addition path required to exploit potential by 2030 in Germany.

We have summarised these in three pillars:

First of all, planning certainty must be guaranteed along the entire value chain. For example, installation companies must prepare for the additional demand at an early stage and train the corresponding skilled workers.

PV plants should increasingly be marketed closer to the market. In the area of large-scale plants, for example, a minimum CO2 price could also ensure in the electricity sector that PV parks can increasingly be built without subsidies. For small old plants, simplified access to the register of guarantees of origin after the expiry of their EEG subsidy would improve the revenue opportunities in other direct marketing. Besides that , and the integration of these plants into their own portfolio would become more attractive for private-sector direct marketers. Inefficient collection options such as the currently discussed market value pass-through by the grid operator could thus become less important.

So far, small-scale PV systems have mainly been installed on the roofs of private one- or two-family houses. To expand the use cases, for example, an extension of the PV new construction obligation, as planned in federal states such as Hamburg or Baden-Württemberg, could be transferred to all federal states. The tenant electricity model could also be extended from residential to commercial buildings. This would require the deletion of the clause in § 21 para. 3 EEG, according to which at least 40 percent of the building’s surface area must be used for residential purposes.

Beyond the supply of PV electricity within one’s own building, the EU has also created a citizen’s right to participate in a renewable energy community in its Renewable Energy Directive “RED II”. According to this, it should also be possible, for example, to jointly generate and consume renewable electricity within the neighbourhood. We have already prepared a concrete concept proposal for such an energy sharing model for the German Citizen Energy Alliance (Bündnis Bürgerenergie). However, the draft for the EEG 2021 does not even address this issue yet.

The aforementioned measures are only a small part of the complete package that would be necessary to achieve the goal. You can find more details on this in our study.