The consumption structure of natural gas over the past 10 years is shown in figure 1 (Source: BDEW). Almost 40 percent of the German natural gas demand stems from the industry. The industrial sector uses natural gas mainly for process heat, which is needed for industrial processes like chemical reactions, drying and heating materials as well as processing them. 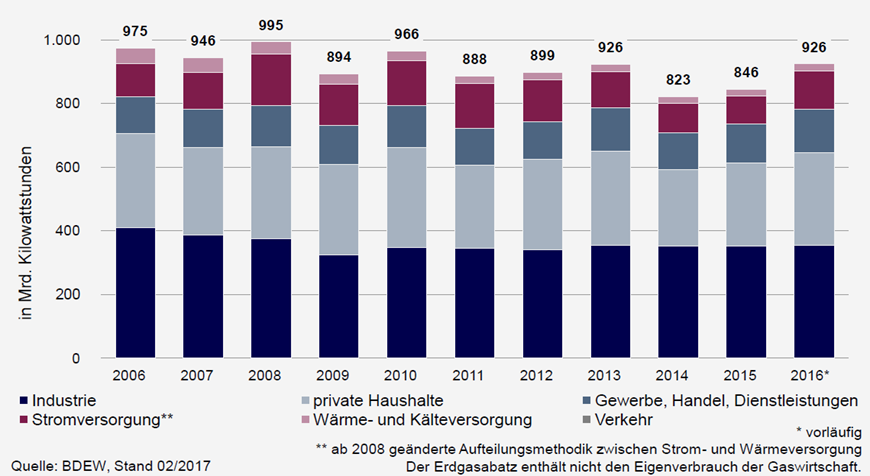 Moreover, larger companies with high demand for heat often run gas-fueld combined heat and power plants (CHP plants) which produce electricity and heat at the same time or they run their own gas power plant to produce electricity exclusively. As the need for process heat is partly depended on the outdoor temperature (e.g. because more energy for pre heating the materials is needed when the outdoor temperature is low) and as industries use natural gas for heating purposes, the demand of the industry sector is slightly seasonal.

This is different to the natural gas consumption in private households and in the sector of commercial trade services: Natural gas is almost exclusively required for firing boilers in buildings. About 50 percent of the residential buildings are heated with natural gas. However, also in larger public buildings or in the service sector the use of natural gas for heating purposes plays an important role. Due to the heating purposes the demand of the mentioned sectors is highly seasonal: While the consumption is particularly high during the winter months, it is almost non-existent during summer.

If the single consumption structures resulting from the sectors listed are added up, the overall consumptions show a strong temperature dependency which can be seen in figure 2 below. 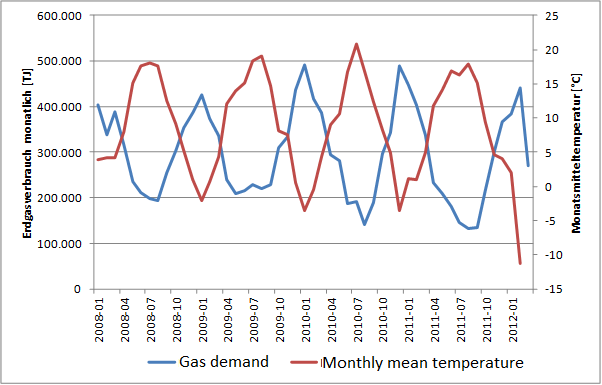 Besides to the temperature dependency, the dependency of natural gas consumption on economic development and the economy can also be determined, especially in the industry sector. The amount of natural gas used for industrial production is higher the higher the product output of the considered company/economy is.

New study: Security of supply can be climate neutral and cost efficient during a cold dark doldrums