So far in 2021, prices on the energy markets have reached record highs. Coal and gas prices in particular have risen sharply, reaching their highest levels in over a decade. These developments have partly led to a backswitch from gas to coal-fired power generation and thus, in conjunction with rising CO2 prices, also to high electricity prices. In the following, we clarify the underlying processes.

Front-month and quarterly prices for the fuels hard coal and gas have been at over 13-year highs in recent weeks. On the side of coal prices, globally rising electricity demand led to higher consumption. Together with simultaneous supply restrictions due to strikes and weather events in Colombia and Australia, this led to sharply rising prices. For example, API 2 index prices for hard coal have more than doubled from just under 70 USD/tonne at the beginning of 2021 to over 160 USD/tonne in September 2021.

Gas prices in the EU have moved upwards due to the cold first half of the year, low storage levels, fewer deliveries from Russia and more LNG deliveries to the still higher-priced Asian region. Here, the prices tripled since the beginning of the year: at the most liquid gas trading point in the EU, the Dutch TTF, prices for the fourth quarter of 2021 rose from around 17 EUR/MWh at the start of 2021 to over 55 EUR/MWh at the beginning of September 2021.

Figure 1 shows the normalised prices of the Q4 2021 forward market contracts for the hard coal price index API2 and the European reference gas price at the trading point TTF in the Netherlands from the beginning of 2020 to 9. September 2021. From the normalised price movement since the beginning of last year, it is clear that prices have moved very strongly upwards, especially from Q2 2021 onwards. 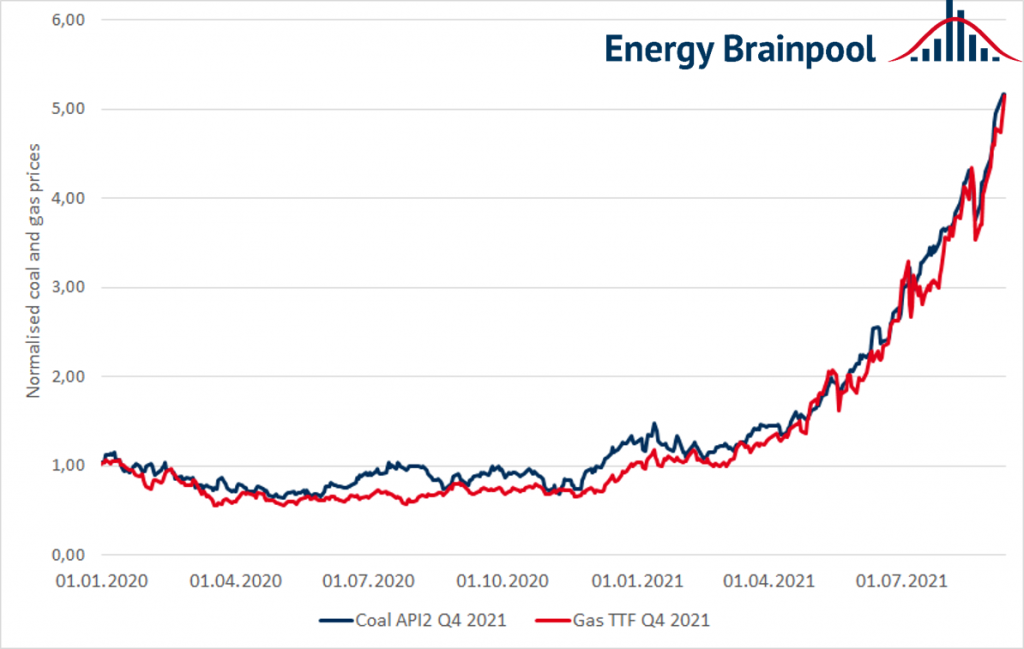 Coal-fired power generation is coming back

Electricity demand in Europe rebounded from the pandemic-induced slump in 2020. At the same time, wind power feed-in in the first half of 2021 was very low compared to the average. In Germany, electricity generation by onshore wind turbines fell by 21 percent compared to the previous year, while offshore turbines fell by 16 percent. Thus, more thermal power plants have generated electricity. The rising fuel costs and also higher CO2-prices of over 50 EUR/tonne thus had a price-increasing effect on electricity prices as well. 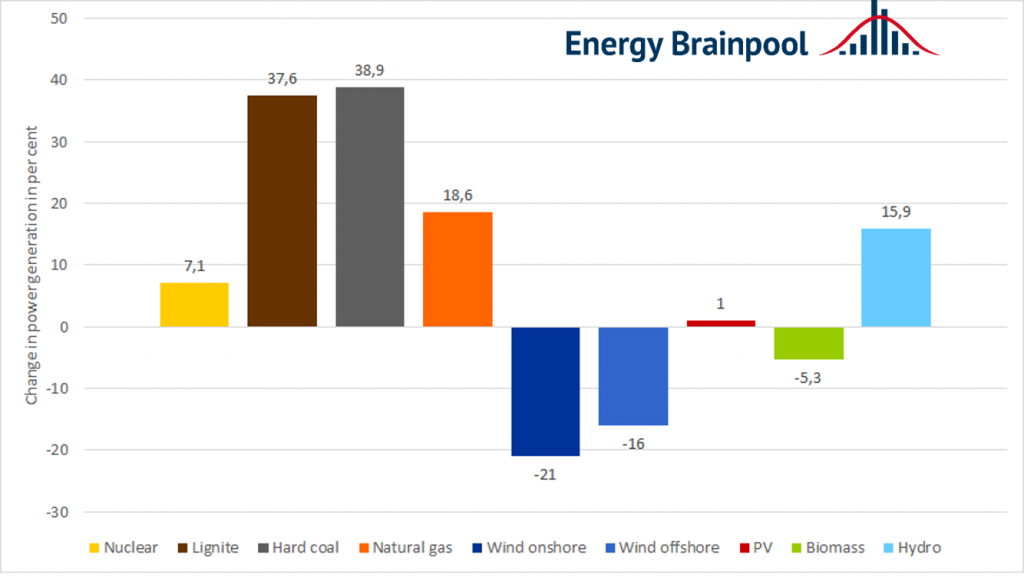 Despite the sharp rise in gas prices, the overall picture still shows a fuel switch from coal to gas. In the first six months of this year, Germany’s gas-fired power plants generated almost 19 percent more electricity than in 2020 and 25 percent more electricity than in 2019. The increase in coal-fired power generation is thus mainly driven by low renewable generation, increased electricity demand and partly also by the high gas prices this year. However, despite the increase in coal-fired power generation in Germany, there is still no sign of a definite backswitch from gas back to coal.

In any case, the current development shows the complex processes on the energy market and the effects of interacting commodity prices on shifts in the generation mix.

Learn more about energy futures market trading in our live online training “The Futures Market for Optimising Power Trading” on 6 and 7 October 2021 (available in English on demand).