In August, the results of the third round of innovation tenders have been published. The federal government receives record revenues on emissions trading. The starting signal was given for the first tender round for fast charging stations. New record prices on both short-term and futures markets.

Bidding volume was reduced in the innovation tenders

As in the previous innovation tenders on 1 April, only plant combinations could participate in this round of tenders, i.e. renewable energy plants with at least two different generation technologies. All bids were exclusively combined photovoltaic-storage power plants. A total volume of 250 MW was put out to tender. Six bids were excluded due to formal errors. Even without these exclusions, the round was undersubscribed, and the total volume was reduced due to the legal quantity control. This states that, when undersubscribed, only bids up to or exceeding 80 percent of the bid quantity of the admitted bids can participate in the tender. In the end, only 16 of 23 bids with a volume of 156 MW were awarded (source: Montel).

The average volume-weighted award value in this bidding round was 4.55 ct/kWh, higher than last time’s 4.29 ct/kWh. Accordingly, the lowest bid value (3.99 ct/kWh) and the highest bid value that was awarded (5.48 ct/kWh) were also higher than in the previous round (source: pv-magazine). 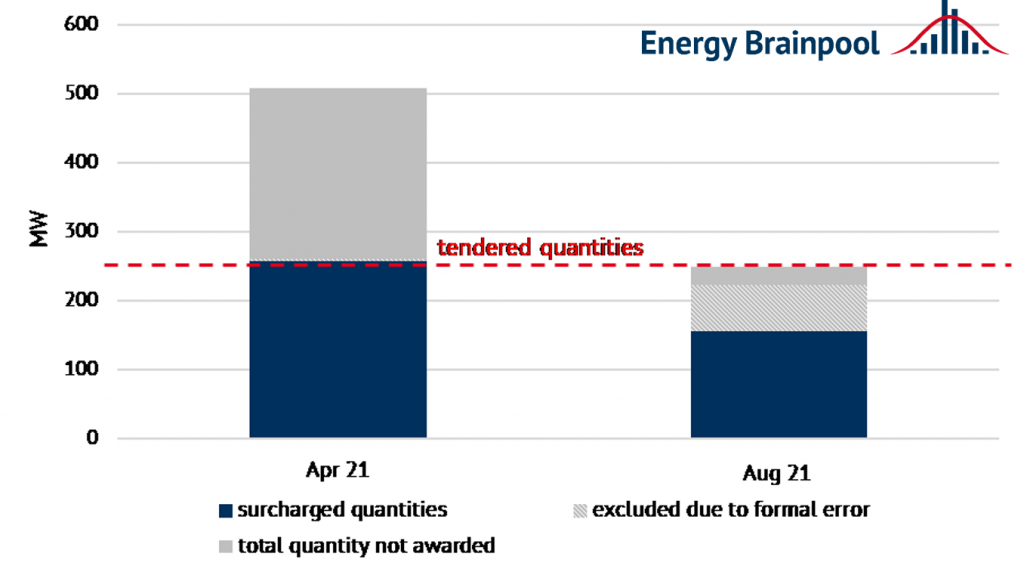 Due to the steady rise in CO2 prices, the federal government receives all-time high revenues from emissions trading. The auction revenues flow entirely into the so-called Energy and Climate Fund (EKF). The EKF is intended to finance climate protection measures. In the first half of 2021, the revenues amounted to 2.4 billion euros. This means that the 2020 annual total of just under 2.7 billion euros will soon be exceeded. The previous record revenue of 3.2 billion euros in 2019 will also be trumped this year, according to estimates by the Emissions Trading Authority. Figure 2 shows the rapid increase in CO2 prices compared to previous years (source: DEHSt). 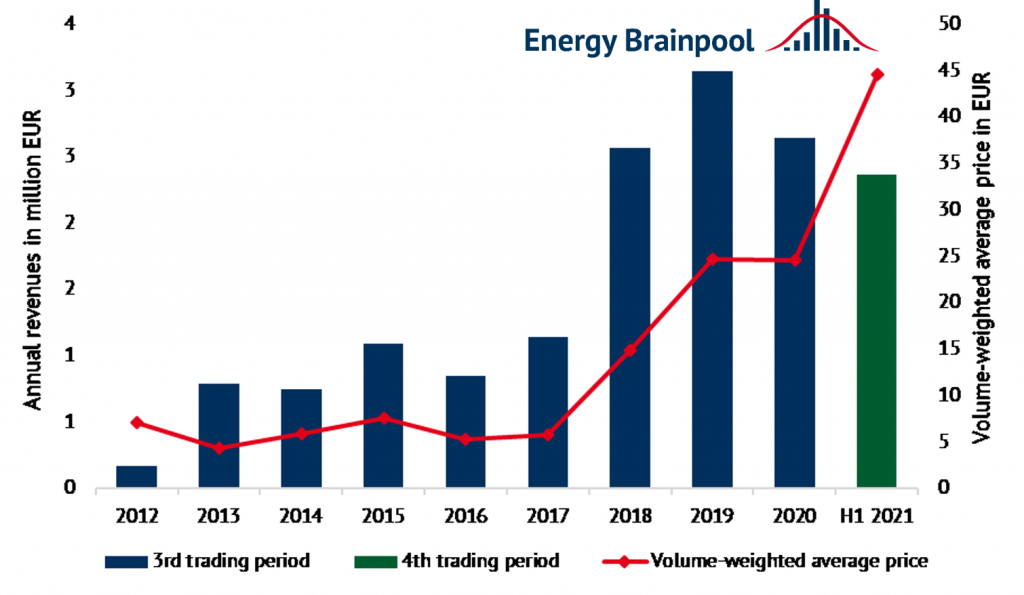 Even higher revenues are expected in National Emissions Trading. Since the beginning of the year, 25 EUR/t CO2 is due for fuels, heating oil and gas. By 2025, the CO2 price will be raised to 55 EUR/t. The Federal Ministry of Finance expects revenues of a bit more than 7.4 billion euros from this for 2021 (source: Tagesschau).

The first round of tenders for the expansion of charging infrastructure in Germany has been opened. The Federal Ministry of Transport and Digital Infrastructure (BMVI) has invited tenders for the improvement of the infrastructure of medium and long-distance traffic for approx. 1000 fast charging locations with at least 150 kW by 2023. Around 2 billion euros are available for this purpose. The tender will be issued in two parts. In the first part, motorway lots will be offered. These are approx. 150 to 200 locations on the federal motorways, which will be divided into four to five lots. In the second part, regional lots will be tendered. Here, bidders have to find suitable sites within approx. 900 search areas of the 23 regional lots. These search areas specify a certain area, e. g. around a transport hub. Figure 3 shows the regions (source: BMVI). 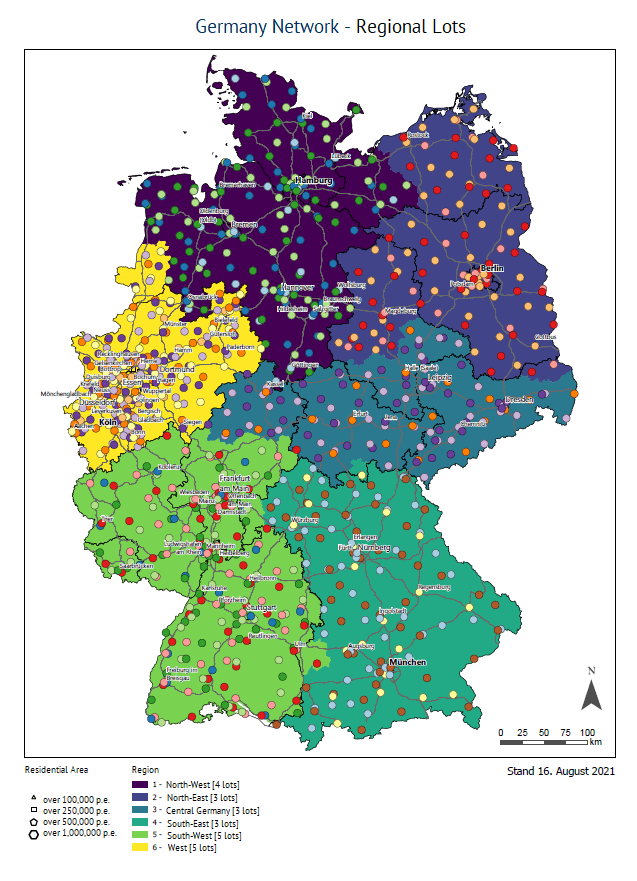 It was also announced in mid-August that the BMVI will provide a total of 500 million euros for the further development of public charging infrastructure in Germany by 2025. The aim is to set up 50.000 charging points, around half of which are to be fast-charging stations. From 31.08.2021 to 18.01.2022, companies, cities and municipalities, public institutions and private individuals can apply for funding and be reimbursed up to 60 percent of the eligible costs (source: BMVI).

At 150.50 USD/t, the coal price had reached its 13-year high until it followed an abrupt drop in gas prices. Currently, the coal price is rising again. It is supported by low supply, sustained demand and rising gas prices. Due to low inventories and feared supply problems, the gas price is growing steadily (source: Montel).

Its course also has an influence on the front year electricity and on the EUA lead contract. Towards the end of the month, the CO2 price reached an all-time high of EUR 59.85/t. The electricity price reacts to these developments and shows a rising trend (source: Montel). The percentage price development of the commodities can be seen in Figure 4.

Few hours of sunshine and lots of rain

This August is characterised by cool temperatures and little sun. The number of sunshine hours was 30 percent below the previous year’s value (source: Montel). The average share of renewable energies in electricity generation in Germany was 52.80 percent, which is both above the annual average and five percentage points above the previous year’s value (source: Energy-Charts).

There were new records on the short-term markets. Cal 22 rose to an intraday high of 86.90 EUR/MWh. This is the highest level since June 2008. The front month even rose to an all-time high of 102 EUR/MWh. Prices are supported by high fuel prices and low wind feed-in (source: Montel). Figure 5 shows electricity generation and consumption in June 2021. 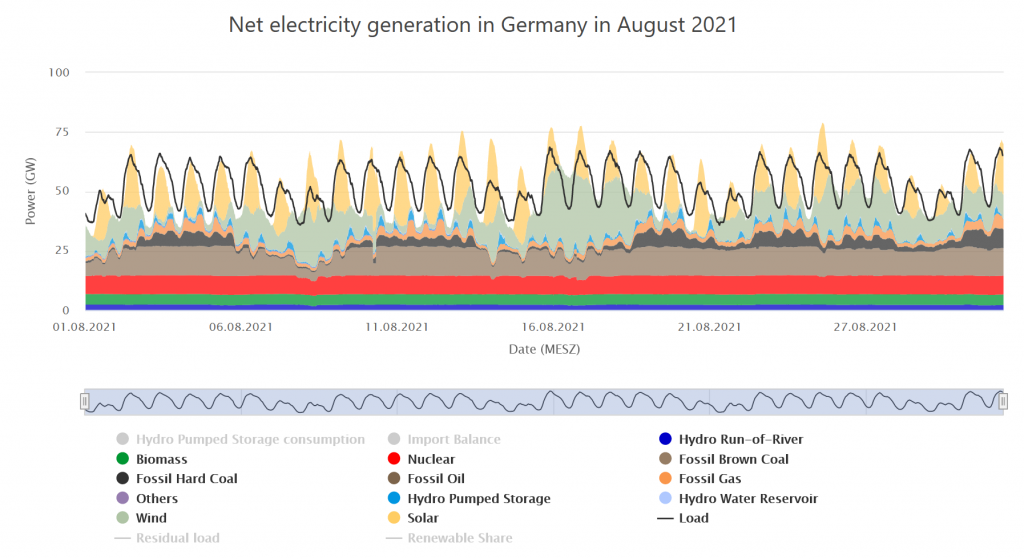