The results of the tenders for renewable energies were almost predictable. Minimum distances for wind parks and the 52-GW cap for PV remain contentious issues. The figures for the storage sector for 2019 are consistently positive. The effects of the global spread of the new corona virus are particularly noticeable in the energy sector on the price side.

RE tenders and expansion obstacles

For both onshore wind and PV, the German Federal Network Agency published the results of the tender from 1 March 2020 (source: Federal Network Agency). Only half of the capacity put out to tender has been used by projects. Precisely, only 150 MW instead of 300 MW were awarded. The shortfall in projects for wind energy thus continued (source: Montel). In the case of PV, the average award value rose slightly, as Figure 1 shows.

Due to the COVID-19 pandemic, the Federal Network Agency has decreed that the tenders will continue to be held. However, not all results will be made available online, otherwise the implementation deadlines will begin. For bids that have already been awarded, the extension of the implementation deadline for the projects can be extended upon request. 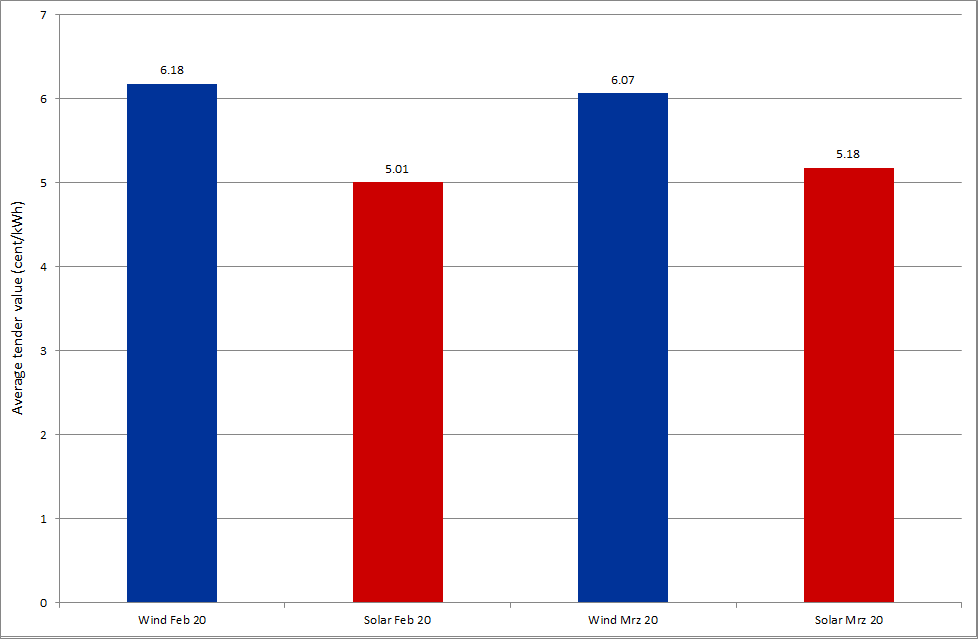 Despite demands from the industry and associations, political decision-makers have not yet been able to reach agreement on the abolition of the 52 GW cap for PV systems below 750 kW or the minimum distances for onshore wind. On 12 March, a meeting of the federal and state governments in the Chancellery was supposed to achieve a breakthrough. As long as the government cannot agree on the clearance rules for onshore wind energy, the abolition of the expansion cap for solar is also on hold (source: PV Magazine).

Demands from the Federal States

The federal states in particular are calling for the abolition of the 52 GW cap, as well as more planning freedom with regard to the proposed minimum distance of 1000 metres between settlements and new wind farms (source: Erneuerbare Energien). A draft amendment to the renewable energy law to this effect was already submitted by the Bundesrat to the federal government in autumn 2019.

However, since the governing parties of CDU and SPD cannot agree on regulations regarding minimum distances for wind power, PV is still being held hostage. Thomas Banning, CEO of Naturstrom, also found clear words: “The Grand Coalition is not capable in terms of energy policy”. (Source: PV Magazine).

The situation surrounding the spread of the Sars-CoV-2 virus is currently tying up all resources, so that no further breakthrough is expected in the coming weeks in the important questions of expanding renewable energies.

Positive development of the storage market in 2019

The German Energy Storage Association presented the industry figures for the past year in mid-March. The analysis showed that all storage technologies grew continuously. With more than 13,000 employees and sales of EUR 5.5 billion, market growth increased by 10 percent compared to 2018 (source: BVES).

In particular, the number of electricity storage units in industry and commerce increased. Here, storage facilities are used for uninterruptible power supply, peak load management, the optimisation of production processes or sector coupling. 87 percent of the sales of larger storage systems are attributable to industry and commerce. The remaining investments are made either by grid operators or energy supply companies. 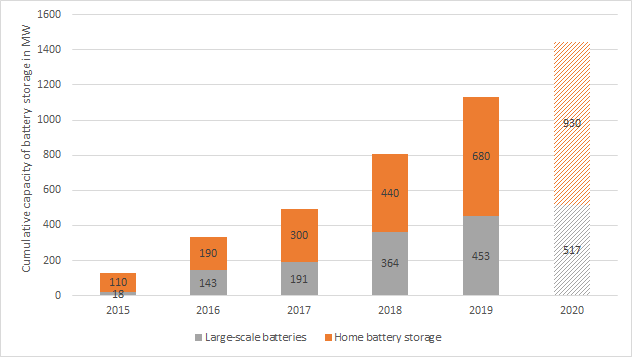 The global impact of the corona pandemic

Energy is necessary for all economic processes. With the global spread of Sars-CoV-2 and the drastic measures in most of the affected countries, a worldwide recession and thus a decline in the demand for energy in various forms is very likely. The first reactions of global but also national energy markets also indicate a lower demand and therefore lower prices. Also read our analysis on the effects of the Corona Crises on energy markets (insert link)

On 9 March 2020, the oil price fell to its lowest level since the outbreak of the Gulf War in 1991. Both the decline in demand due to travel restrictions and the expansion of Saudi Arabia’s production led to this steep price collapse. With the increased production of oil, Saudi Arabia wants to maintain or gain market share and force oil producers with higher costs, such as the shale oil industry in the USA, or even Russia out of the market.

Due to the economic slump this year, demand for oil could probably shrink for the first time since 2009 (source: Montel). Oil prices fell by almost 50 percent from over 50 USD/barrel at the beginning of March to 27 USD/barrel in mid-March, before stabilizing slightly by the end of the month at least for contracts further into the future.

What does the corona pandemic mean for the German electricity market?

The German front-year for electricity also fell to a 2-year low of 34 EUR/MWh. The dramatic fall in the price of CO2 certificates by 40 percent or almost 10 EUR/tonne compared with the beginning of March was the main reason for this. Figure 3 shows the price developments of electricity, CO2 and oil for the period from early January to the end of March 2020.

The low prices on the commodity markets indicate that an economic downturn for 2020 has already been priced in, at least on the energy side of the economy. If the measures taken against the spread of the new corona virus take effect, the price decline could slow down and reverse again. Due to the low level of economic activity, Germany would probably achieve the climate target for 2020 according to Agora Energiewende (source: Montel).

On the short-term market periods of high and low wind alternated, which also affected day-ahead prices. As a result of the Sars-CoV-2 pandemic, demand for electricity in Germany fell by three to five percent, which is less than the decline in Italy (-22%), France (-17%) and Spain (-11%) (source: Montel). Figure 4 shows the electricity generation by energy source in Germany in March 2020. The very low generation from hard coal-fired power plants in March 2020 as well as increasing solar generation due to the shift in seasons is obvious.

Coronavirus pandemic and the energy market: a quantitative assessment of medium-term developments

Online or presence: Which training format suits me?