Almost a third of China’s capacity is renewable

The Chinese renewable energy portfolio of 2015 has been published. Important transmission power line connects wind and load centers via Beijing.

Sources and further information with kind recommendations of Azure International.

The National Energy Administration published a report for the renewable energy data for 2015. The total installed renewable capacity stood at 480 GW. Total capacity in China stands at roughly 1510 GW in 2015. Roughly one third of the Chinese power generating capacity is thus already renewable, the majority being hydro power. Total power generation from renewables in 2015 reached 1363 TWh, approximately 24.5 percent of China’s total electricity generation and thus roughly on par with the European average. Figure 1 shows that 80 percent of this electricity has been generated by hydro-power and about 220 TWh or 5 percent from variable renewable energy sources, such as wind and PV. 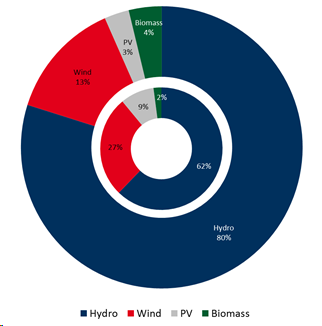 Furthermore, the National Development and Reform Commission (NDRC) approved a new ultra-high-voltage DC power line with 800kV from Inner Mongolia via Beijing to the province of Shandong as shown in figure 2. The line shall mainly serve to transport wind power from the northwestern region to the load center at the east coast. The total transmission capacity of the line will be over 8 GW along more than 1230 kilometers, while the transmission of about 55 TWh are expected annually. The expected investment costs are expected to amount to more than RMB 22 billion (EUR 2.96 billion) and the NDRC expects that the line will reduce carbon dioxide emissions by almost 50 million tons. 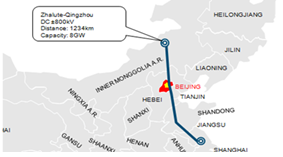 From March to July 2016, the city of Beijing imported 21 TWh of wind and solar power via cross-provincial power trades. As figure 3 exemplifies the important electricity was mainly derived from the large regional power grids of the so called Three Norths, Dongbei, Xibei and Inner Mongolia with 8.2, 7.5 and 5 TWh, where an excess of wind power generation prevails.

By the end of July 2016, direct cross-provincial power trading from renewable sources grew to almost 200 TWh for China as a whole. The bulk of the traded power originates from hydro-power generated in the south-west of China.