Compared to the city and all the possibilities it offers its inhabitants, rural areas often remain in the background. Are topics such as E-Mobility and digitalisation therefore only being developed further in and for cities? Will the countryside remain a “Dumb Country”?

How rural areas also benefit from E-Mobility and digitalisation!

In a city-countryside comparison, rural areas often lag behind due to their apparently limited possibilities. Compared to the city and all the possibilities it offers its inhabitants, rural areas often remain in the background. This applies in particular to the trend topics of e-mobility and digitalisation. The urban space is often presented as a showcase project. The expression smart city is en vogue. There are many international and national projects to implement smarter urban development. The smart cities dialogue platform of the German Federal Ministry for Environment, Nature Conservation, Building and Nuclear Safety (BMUB) can be mentioned as an example.

Are topics such as E-Mobility and digitalisation therefore only being developed further in and for cities? Will the countryside remain a “Dumb Country”?

In the following we want to elaborate on a counter-plan that describes public services, as well as the use of new technologies and applications for a resource-conserving economy and life also in rural areas.

What is a smart city?

First of all, a smart city should be briefly defined and explained. Basically, the term covers the development and the use of digital technologies to find solutions for different areas of urban development.

For the Deutsche Institut für Urbanistik the „Smart City is a city in which the use of innovative (in particular information and communication technologies (ICT)) achieves intelligent solutions for very different areas of urban development, such as infrastructure, buildings, mobility, services or security. In infrastructural terms, this involves intelligent networks within a sector (e.g. the combination of different systems for the use of renewable energies) or between sectors (e.g. vehicle batteries as energy storage devices). The term is often used as a synonym for efficient cities.

Connecting different sectors using digital technologies plays an important role in Smart Cities. Intelligent interconnection of the energy industry with its electricity, heat and the transport sectors promises increased efficiency and a higher quality of life.

But why should this intelligent interconnection only take place in urban areas and not in rural areas?

Infrastructure in the city is generally cheaper for users than in rural areas due to the large population and thus economies of scale. Less populated areas also mean that residents have to travel longer distances. For classic infrastructure providers, such as water, electricity, gas and network operators or transport companies, this means that their costs can be distributed among fewer users. In turn the individual user necessarily pays more.

The above-mentioned points mirror the status quo at first. Current developments and new technologies may shift the focus and bring rural areas to the spotlight.

Which developments play a major role in this context?

For a long time the energy industry was characterized by centralized generation and distribution of electricity using the grid. The energy transition and constantly decreasing costs of electricity from decentralized renewable energies, such as wind and PV, are now changing this situation.

More frequently some of today´s generated electricity is fed back from low and medium-voltage levels to higher-voltage network levels. The decentralized generation of electricity in this case from renewable energy sources, is increasingly capable of covering all the demand of a rural distribution grid area.

This is illustrated in the examples below: Electricity flows from the high voltage network of the company EWS (Elektrizitätswerke Schönau) (EWS) in the Black Forest and high voltage network areas of the company Lechwerke  in Southwestern Bavaria are illustrated in figures 1 and 2. The two figures show the flow of electricity from a higher to a lower voltage level over a period in summer 2015 and 2016.

Figure 1: Electricity flow from the medium voltage level to the low voltage level of the EWS in one week of summer 2015. Data source: EWS

In the decentralized power system, local consumption and management of the low voltage levels, i.e. the distribution networks, are of major importance. Figure 3 shows the percentage of the installed power of renewables in Germany at the end of 2016 according to voltage level.

Figure 3: Percentage of the installed capacity of renewable energies at the end of 2016 according to voltage level in Germany 2016, Data source: Übertragungsnetzbetreiber, EEG-Anlagenstammdaten)

Clearly, just under three-quarters of the renewable generation capacity is connected to the low and medium-voltage levels. This equals an electricity generating potential of more than 70 GW.

The establishment of common tenders for wind and photovoltaics on April 1st 2018 is a sign that the distribution network issue is becoming increasingly important. In the common tender process, so called grid components will be added to the bid prices of the bids from wind and PV in order to control the expansion of renewable energies. In areas with large capacities of wind and PV and low peak load, fewer renewables are to be added. The aim is to avoid costs for additional grid expansion in these regions.

In addition, Germany has made commitments to reduce greenhouse gas emissions in line with the climate agreement in Paris, as well as the targets of the 2050 climate protection plan from 2016. Since the government of the CDU/CSU and SPD has officially abandoned the climate target for 2020, the achievement of the targets for 2030, i.e. a reduction of greenhouse gas emissions in Germany by at least 55 percent compared to 1990, becomes more urgent in the coming decade.

The different sectors of electricity, heat and transport have different percentages of total German emissions. Emissions from transport are about 20 percent of Germany´s greenhouse gas emissions. As a result of increasing traffic volumes, these are currently pointing upwards rather than into the opposite direction. The 10 percent target for the share of renewable energies in the transport sector by 2020 is presently also far from being achievable. E-Mobility in general might be the most suitable way to bring climate targets and renewable energy targets in the transport sector back on track. Especially if the electricity used in electric vehicles is generated from renewable energy sources, this reduces not only local emissions of pollutants but also greenhouse gas emissions. If it is also possible to use renewable electricity that would otherwise be fed into a higher voltage level in the grid, grid expansion costs can be minimized in the distribution grids.

In this context, the intelligent use of ICT can create many opportunities and thus leverage synergies. Low-emission e-mobility benefits from better forecasts of feed-in from renewable energies in connection with the corresponding grid situation. For example electric vehicles could be charged precisely when energy generation would otherwise place a heavy burden on the distribution networks in rural areas.

Mobility in the future will be characterized by less privately owned vehicles, while still having high levels of flexibility through autonomous driving and corresponding mobility offers by service providers.

What can a “Smart Country” region look like, and what is this about?

A „Smart Country“ region can be understood as a non-urban area, in which the use of advanced ICT enables resource flows to be optimized for local consumption.  As shown above, the combination of renewable energy generation and e-mobility into an optimized system is predestined for the first approaches. Fluctuating generation can be used in the best possible way.

Such a „Smart Country“ region is shown schematically in figure 4. Both the distribution grid and decentralized generators (PV and wind) and consumers (electric vehicles and batteries) are integrated into the grid topology. 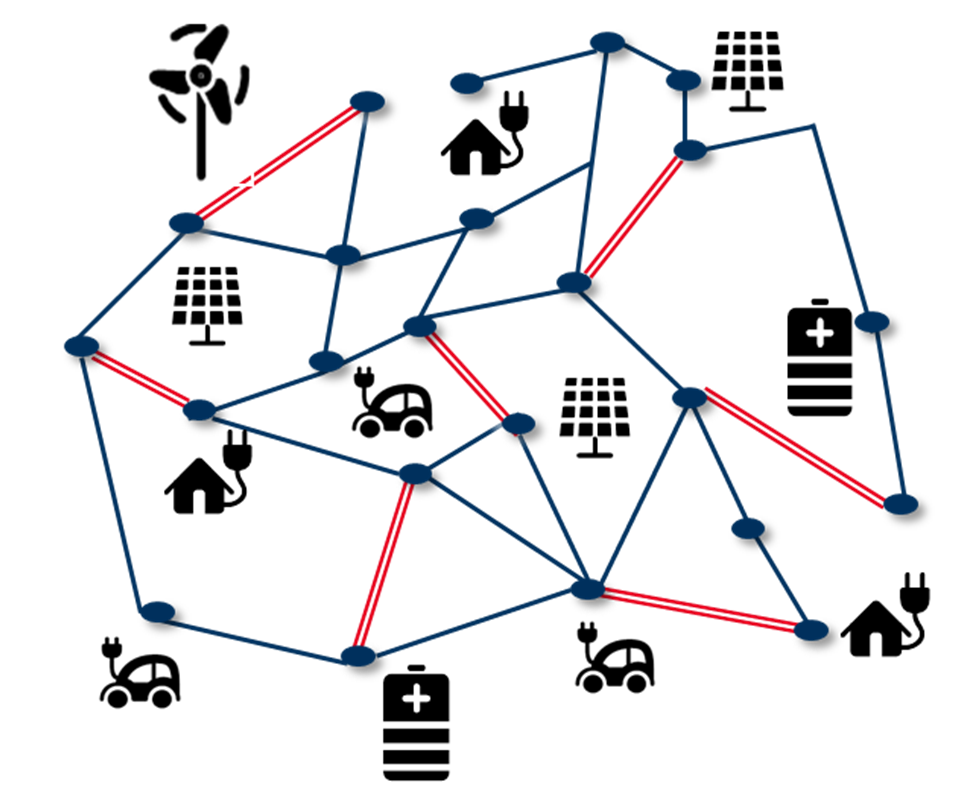 Certainly, this integration must correspond to the generation profiles of fluctuating renewable energies, as well as the demand distribution of consumers and the resulting load flows in the grid.  Thanks to intelligent charging processes, i.e. a shift of charging time to times when electricity is available locally, e-mobility can also have a positive effect on the grid. The shift in the demand for electricity from e-mobility in times of high renewable electricity generation through flexible charging processes is particularly relevant in this context.

Households and private citizens also benefit from these developments. The use of electricity from the company´s own PV system in combination with an intelligent storage/energy system enables e-mobility without dependency on petrol/charging stations. In addition, cost-optimized loading processes or autonomous driving as an improved mobility service will have advantages for residents of a „Smart Country“ region.

Providers of infrastructure-services and services can benefit from the focus on new users and business areas. The first major service providers such as Deutsche Post have already prepared themselves for an electrical (transport) future and are fabricating their own electrically powered transporters. With greater automation and possibly autonomous vehicles, rural areas can become the nucleus of an intelligently controlled, decentralized and renewable energy system. For example the network „Autonomous Driving in Rural Areas” in Schleswig-Holstein combines e-mobility with renewable energies for autonomous driving concepts. Another example is the driverless electric bus used by Deutsche Bahn in Bad Birnbach in the South of Bavaria. It commutes between train station, town center and the thermal baths of the village. Although this bus only takes a predefined route, autonomous shuttles that can travel to specific places based on the customers preferences are to be built in the future.

With suitable projects and advanced use of ICT, rural areas can greatly benefit from the transformation of the energy system. Proactive designers, entrepreneurs and users are required to help shape the developments outline above. Local and cooperatively managed companies with strong roots in the region can play out their key benefits and thus also fill the term “Smart Country” with life.