Digitisation, automation and blockchain – where is the disruption?

The value chain in the energy industry no longer is traditionally linear but increasingly circular. This, as well as “behind-the-meter” business models, leads to ideas for digitalisation and the application of Blockchain. Which use cases are considered and what is already being tested today will be explained in this article.

The traditional value chain of the energy industry ran linearly from generation over transmission and distribution to the end customer, according to the actual flow of electricity. Figure 1 shows the traditional value chain, where the physical electricity flow is managed by the grid operators, which are regulated by the state due to their status of being a natural monopoly. 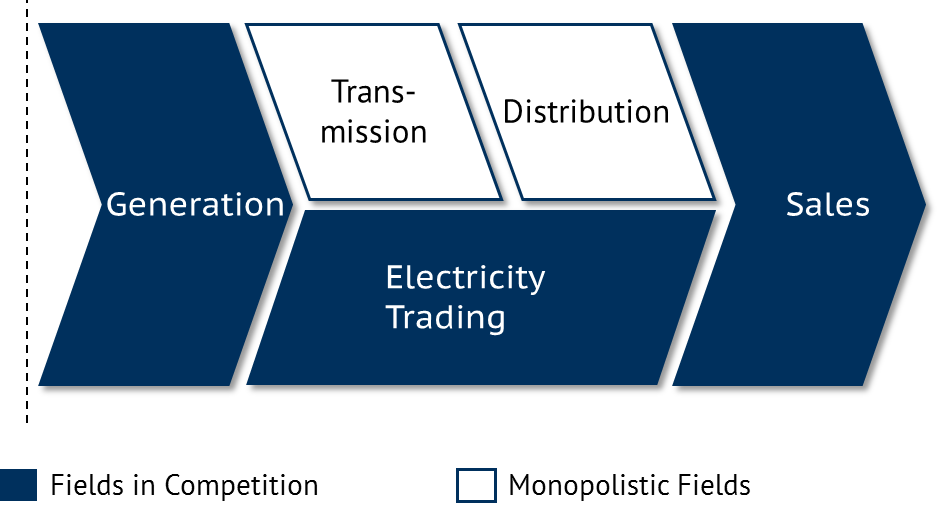 However, the energy market has changed considerably, particularly as a result of the decentralisation of generation by fluctuating renewable energies. To name just a few of the new business areas in the traditional areas of the value chain: energy storages and flexibility in generation, network congestion management in the transmission network, decentralised supply, feed-in management in the distribution networks, as well as energy services and demand-side management in the area of sales. Electricity trading, as the commercial “trick” to balance generation and demand in the liberalised electricity market, has become much more short-term and its importance has increased. New business areas, such as the direct marketing of renewable energies, also developed.

Increased digitalisation can help to enhance the degree of process automation. Automation can help to deal with increased complexity – whether it is the compilation of billing reports or short-term trading in the intraday market with more than 100 different products for one day.

In the energy market, a circular value chain rather than the traditional linear one might become more important and also prevail in the future. This applies to especially to the electricity market which may also become more relevant by the electrification of the other sectors – key word sector coupling. The evolution is displayed in Figure 2 together with a selection of processes, new developments and products. In addition, it shows blockchain applications in the energy industry. What is decisive, however, is that the traditional linear value chain is closed by the prosumer (on-site power generation) and therefore has become circular. 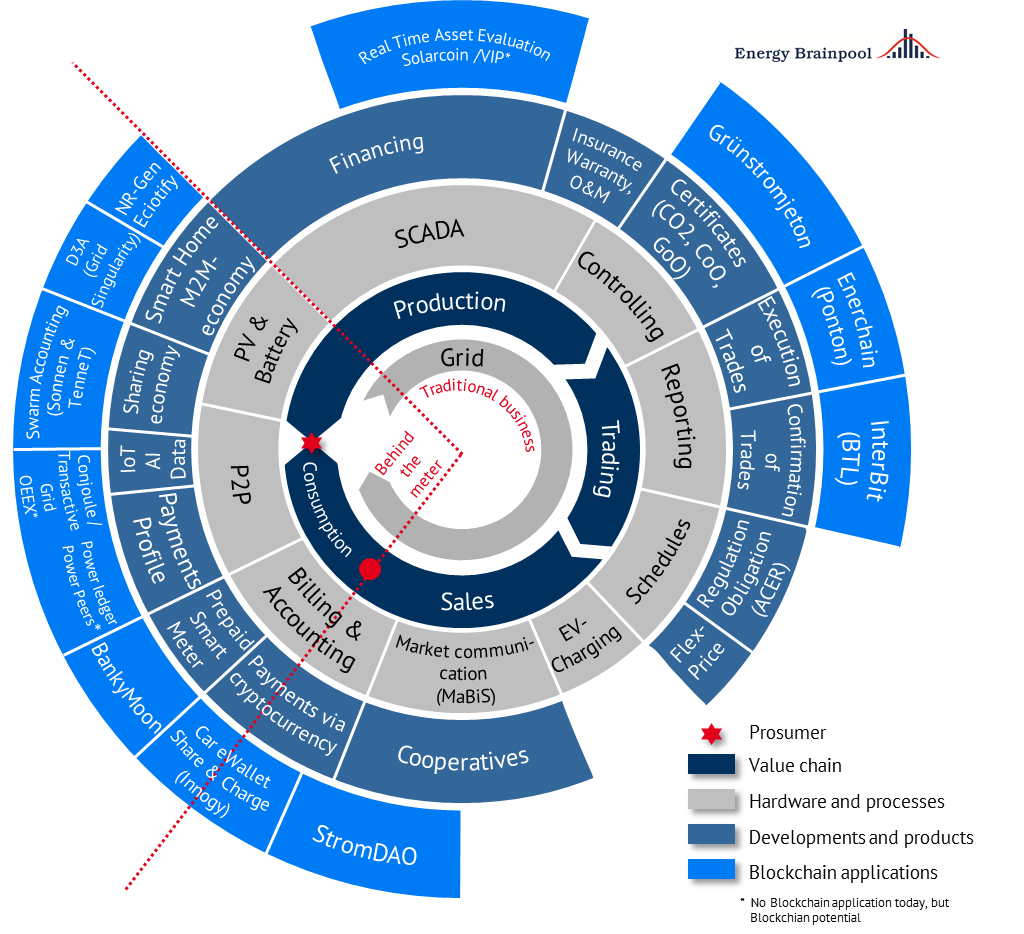 As physical basis of electricity transmission, the grid is the heart of the value chain. The second inner circle shows the value chain with the areas generation, trading, distribution, as well as consumption and the connection between consumption and generation. Especially this last connection is a characteristic of the new energy industry with prosumers (both households and industry).

Without going into all details of Figure 2, it is obvious that most of the blockchain applications are situated in the left quadrant, which is the area called “behind-the-meter”.

There are also blockchain solutions for the traditional business areas in the energy industry, such as the Enerchain of Ponton or the InterBit-blockchain of BTL. They stand for OTC trade transactions without intermediaries.

Wherever energy market regulation does not prevail, utilities have little experience. There are a lot of start-ups and projects that use blockchain applications in combination with trend themes such as internet-of-things, artificial intelligence and sharing economy. Also a build-up of peer-to-peer trading platforms by Conjoule (DE), Powerpeers (NL) and Power Ledger (AUS) has its place there. Up to now, blockchain applications mostly affected business fields of the future, less so the traditional areas of energy suppliers.

So where can the blockchain disrupt? The blockchain as a new technology can change pathbreaking in areas where much is still new and little to no regulation prevails, e.g. “behind-the-meter” and in the whole area of presuming. Moreover it can disrupt in areas where digitalisation is already in place and allows greater process efficiency through automatisation. While the blockchain was hyped by everyone about one year ago, actual applications, examples and concrete projects show in which way this new technology finds its way into practical utilisation.
More about blockchain in the energy sector in our seminars on 24th of October 2017 or 23rd of November 2017 in Berlin (in German, but also provided in English and individual In-house workshops).

What is the minimum CO2-price in order to affect the merit-order?