In this article we introduce the most important agile methods such as SCRUM. These so-called ‘frameworks’ are not rigid requirements that a company must meet to be agile. They are rather to be understood as tools that help you to put the values and principles of agile working into practice.

The five methods described below are already being used by companies in a wide range of industries to become more flexible and dynamic and to be able to react to changes better and faster. Digitalisation in particular is rapidly increasing the complexity and dynamics with which companies have to cope – one response to this is agility.

The following questions may now arise: What does agile work mean? And why does my company or team need it? To answer these questions, we recommend that you first acquire the necessary background knowledge through our first two articles in the series (“Agile: Is it useful or can we do without it?” and “How does a dynamic organization work?“).

SCRUM is the most prominent method – but it is also less agile than other frameworks because it is more regulated and has approaches to controlling (based on the theory of empirical process control).

The name comes from the rugby vocabulary and names the restart of a game after a (minor) rule violation. The easiest way to understand why this name was chosen is to understand the concept: SCRUM is a helpful method for product development teams, but also makes sense for completely different areas.

Instead of following a rigid and often long-lasting process according to the waterfall model (step-by-step processing of a project, whereby tasks are only carried out one after the other), in SCRUM there are shortened process units (sprints) which can be repeated as often as required until the desired result, e.g. an optimal prototype, is achieved. A sprint is usually completed after only one to four weeks. All sprints of a project should have the same length and as soon as one is finished, the next one should start.

The SCRUM-Framework comprises a SCRUM-Team and its associated roles, as well as events/ceremonies (meetings), artefacts (tools) and three pillars/principles (see Figure 1).

Figure 1: The three pillars/principles of SCRUM (Source: The Scrum Guide, 2017)

In every SCRUM-Team there are three roles, whose tasks and responsibilities are clearly defined and do not overlap (see Figure 2): 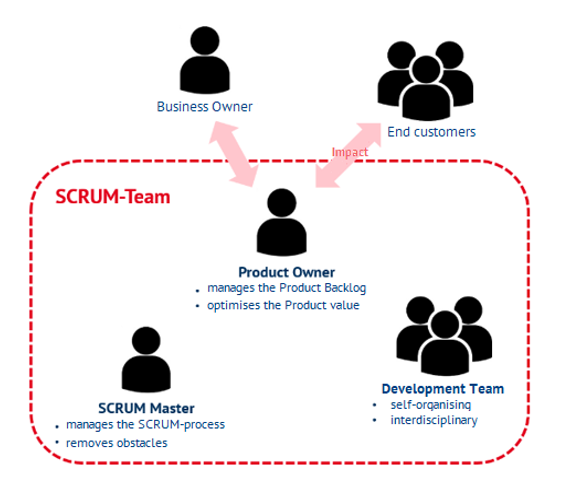 Types of artefacts in SCRUM

Three artefacts are used in SCRUM: the Product Backlog, the Sprint Backlog and the Burndown Chart.

The Product Backlog is a list that is created by the Product Owner and in which he prioritises the characteristics and properties of his product version. In Sprint Planning, the Development Team writes so-called User Stories. These are all requirements of a Sprint, which are taken from the Product Backlog and formulated as short texts by the Team. In summary, these User Stories are called Sprint Backlog. The Burndown Chart is intended to show the Team during the Sprint what progress they have already made. When all tasks or User Stories of a Sprint are completed, there should be none left.

In addition, SCRUM has three so-called ceremonies, i.e. types of meetings. As already mentioned, there is Sprint Planning, where the Team discusses the User Stories at the beginning of each Sprint and writes them down.

The Daily Scrum is a short daily meeting (maximum 15 minutes), which serves to inform each Team member about progress and possible obstacles.

The Sprint Review is a kind of final meeting where the results of a Sprint are presented and discussed retrospectively for the Product Owner. Here it is crucial to work out possible improvements for the next Sprint.

For a better understanding, the entire process with three artefacts and ceremonies each is shown in simplified form in Figure 3. 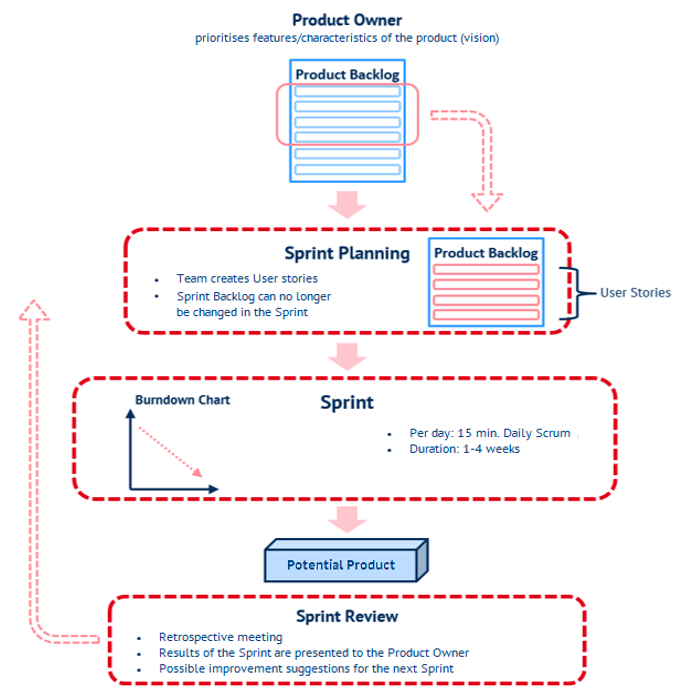 Combination of SCRUM and Kanban Principle

SCRUM is usually linked to the Kanban Principle. This principle involves smaller approximations to agile working. It originates from the so-called Lean Production (minimising stocks, saving costs and making production more flexible). It is also based on the Kaizen Principle of continuous improvement, which requires a more transparent value chain in order to make bottlenecks visible.

In practical terms, this means creating a (virtual) Kanban Board where tasks and their processing can be better monitored. In general, however, Kanban is not a separate framework and only makes sense as a supplement to another tool.

Co-Creation is an innovative approach in which customer proximity is of central importance. This is why it is used particularly often in product development. The idea here is to leave the invention of the “desired” product largely to the customers themselves. This does not mean a new form of market research or survey, but describes Co-Creation Projects that are carried out with a selection of customers and designers.

The professional designers have a purely supporting function. The aim of a Co-Creation Project is to collect as concrete product ideas as possible. The company must then develop and implement one or more ideas.

The Lean Start-up method originated in the Silicon Valley start-up industry. Lean refers to the reduced effort and streamlined development process. In contrast to Co-Creation, the involvement of customers is not fundamental or occurs very indirectly. Nevertheless, the procedure is very interactive and also experimental: the development team collects many product ideas that are not planned for a long time, but are quickly developed into test products or beta versions.

These are then immediately brought to market to monitor customer response. The most successful test products are thus identified and further developed. The shortened product development cycle and the interactive product launch are also reflected in lower costs.

The Design Thinking framework combines the two methods described above. It is based on the assumption that employees from different disciplines can better solve a problem together. Design Thinking as a method is particularly effective when the task or problem is not clearly defined (e.g. “How can the usability of our product be improved?”). The method comprises three principles:

As with Co-Creation, customers are directly and actively involved in the process of problem solving/product development. However, in Design Thinking they should only formulate their needs in relation to the product. How these can be satisfied in the end and how they are incorporated into the product development is ultimately the task of the Design Thinking team. It becomes difficult for the team when customer needs are contracting. There is also the risk of misinterpretations, as customer needs are often expressed in vague terms.

This principle describes an iterative and experimental procedure – similar to Lean Start-up. Customers are asked how the prototype of the product to be developed is received. The prototypes do not have to be perfect or only partial aspects have to be precisely constructed (e.g. if the appearance of a product is developed, the prototype does not have to have an inner life).

Since the cleverest idea is often not the first, the process of brainstorming should be as extensive as possible. This means that ideas should not be judged and dropped too quickly. A heterogeneous development team leads to the desired broadly diversified ideas: the five to seven team members should come from different disciplines and contribute their respective expert knowledge. Creativity is promoted by a flexible space (e.g. height-adjustable and movable tables) and materials with which the team can work haptically.

This method is also based on the thesis that creativity and innovation are promoted by tactile work. By modelling together with Lego® bricks, the idea of “thinking with hands” is implemented. The fact that the hand-brain connection is particularly strong compared to other body regions explains why tactile work appeals to so many brain regions.

LEGO® Serious Play® is usually implemented within the framework of a guided workshop. Organisations support this training because it has a positive effect on motivation, communication, cooperation and creativity of people.

The playful approach (“Play”) is combined with a target-oriented task processing (“Serious”) and thus explains the existing relation to the work context. Even the abstract can be made tangible. This method is therefore also suitable for teams that are not active in product development, but rather in marketing, strategy development or human resources development, for example.

To get to know different approaches, we recommend our Online-Workshop Agility in the Energy Market.

The Corona economic stimulus package and the energy industry