One of the highlights of China’s power market reform is the opening up of the retail electricity market. Currently, more than 20 direct electricity trading centers and platforms have been established.

Sources and further information with kind recommendations of Azure International.

Setting up direct trading platforms that allow industrial and commercial electricity consumers to directly buy from power generators is seen as a crucial step towards a more market-based power system by the Chinese regulators. It is part of the power market reform announced in spring 2015 and aims at reducing governmental control on electricity prices.

When generators sell power to customer through regional or national trading platforms, the grid operators will only be allowed to charge a transmission fee set by the government. “Direct power purchase will help restore electricity’s commodity character and is an important step towards fully opening-up China’s electricity market,” the National Development and Reform Commission announced.

Twenty-two electricity trading centers have been formed as of now, fourteen with a provincial focus, 2 with a national one, as table 1 shows. Most of those centers are however operated by the grid operators and thus do not represent truly independent organizations. 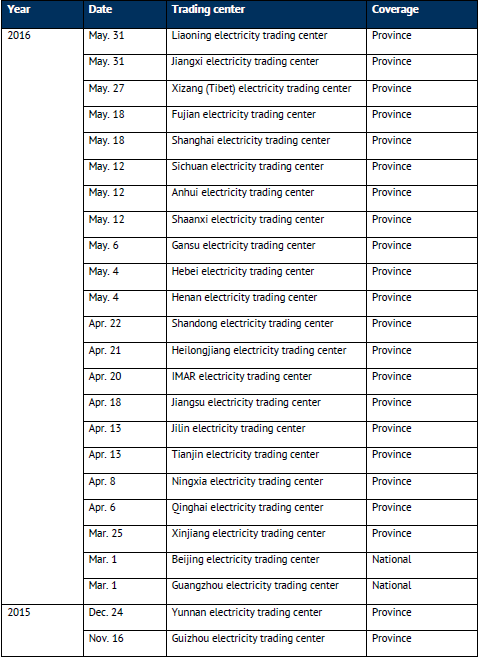 With those centers, China also wants to encourage mid- and long-term electricity trading between regions that have an oversupply of electricity and those that experience shortages. In turn, curtailment rates of renewable energies in provinces in the north and west of China could be reduced.

In addition to the ones shown in table 1, the Sichuan Electric Power Trading Center has been established on 12th of May 2016. Roughly 1400 generators and 600 power consumers have access to the platform. Expectations for the trading center are high: By the end of the year over 160 TWh, almost half of the province’s total electricity generation, are expected to be traded via the Sichuan Electric Power Trading Center.

More PV than coal in UK