Transmission system operator Tennet and storage supplier Sonnen aim to interconnect photovoltaic home storage systems and to apply them in a way that assists the power grid. In the pilot phase, flexibility consisting of 24 MW storage capacity will be used as battery-related redispatch in order to reduce the feed-in management (curtailment) of wind energy.

The interconnection of the decentralized home storage systems is expected to contribute to both, the stabilization of the power grid and to an improved and future-proof integration of renewable energies. Urban Keussen, chairman of the management board of the TenneT TSO GmbH notes: “By implementing this innovative project we provide the citizens with the opportunity to actively participate in the energy transition.” Projects such as this complement the grid expansion and are essential components of the energy transition. Philipp Schröder, managing director of sales and marketing of Sonnen, has a similar opinion: “The future of the energy supply will consist of millions of small and decentralized power sources, prosumers and consumers.” (Source: Windmesse).

Figure 1 sketches the possibility to counteract the curtailment of wind turbines in northern Germany, caused by insufficient transmission capacities in the transmission grid, by interconnecting batteries in households (Source: PV Magazine). 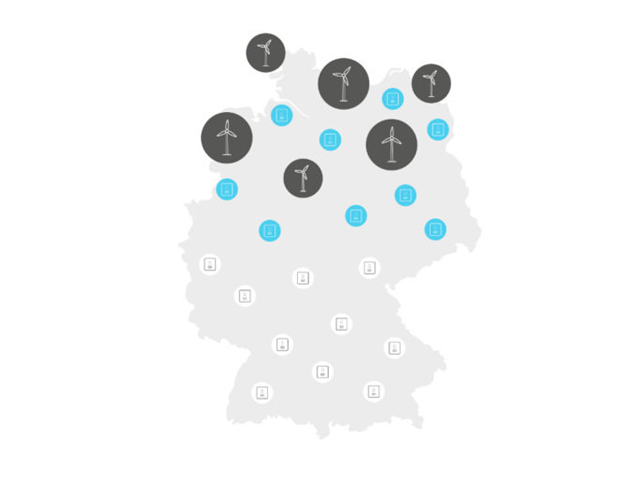 The goal of the project partners is to attract 6000 home storage system owners for the pilot project until the middle of the year (Source: PV Magazine). When assuming an average capacity of 4 kW per home storage system the battery pool would arrive at the strived for 24 MW. Over the past year the costs for stabilizing the power grid, via mechanisms such as redispatch, network reserves and curtailment of renewable-based power plants, have accumulated to 800 million Euro. The possibility to use decentralized storage systems in a system-assisting way is also capable to reduce the network charges for all electricity consumers in Germany.

Furthermore the participating storages will be interconnected by a Blockchain-solution by IBM (member of the Hyperledger project for commercial Blockchain-applications). The Blockchain- technology will especially be used in terms of high transparency and data security. Therefore Tennet would have the overview of the available flexibility in the battery pool and would only have to confirm the process of storing or withdrawing energy. The participation of the batteries in terms of feed-in or withdrawal of energy as well as the respective retrieved amounts of power are recorded in the Blockchain afterwards and therefore function as a transparent register (Source: Tennet) for the (possible future) remunerations.

Both Sonnen and Tennet have high expectations for the pilot project which is supposed to go into operation for redispatch and the interconnection by using the blockchain (Source: Energate) for six months starting fall 2017. „The future of the energy supply will […] consist of millions of small and decentralized power sources, prosumers and consumers. The Blockchain-technology is the key to enable simultaneous data exchange on a huge scale between all of these participants. Thereby it is the missing link to a decentralized future that is entirely free of CO2,” says Schröder (Source: Windmesse). Kreussen expresses confidence as well: “We open the door to an all-new approach in the network control. It is the first step into a new energy world” (Source: Welt).

However, the relevance of the decentralized home storage systems for the energy sector will not be interesting until larger scales are reached. At a market penetration of 10 percent of all German single- and two-family houses with photovoltaic home storage systems the current low capacity of 24 MW would increase to approximately 6000 MW (Source: Welt). The flexibility such a system, equivalent to six big conventional power plants, can induce when automated with the Blockchain-technology is of course significant.