1380 MW offshore wind power plants forego state subsidies. According to the experts at Energy Brainpool, the average revenue for non-subsidized offshore wind farms will grow from around 53 EUR/MWh in 2025 to around 76 EUR/MWh in 2035. 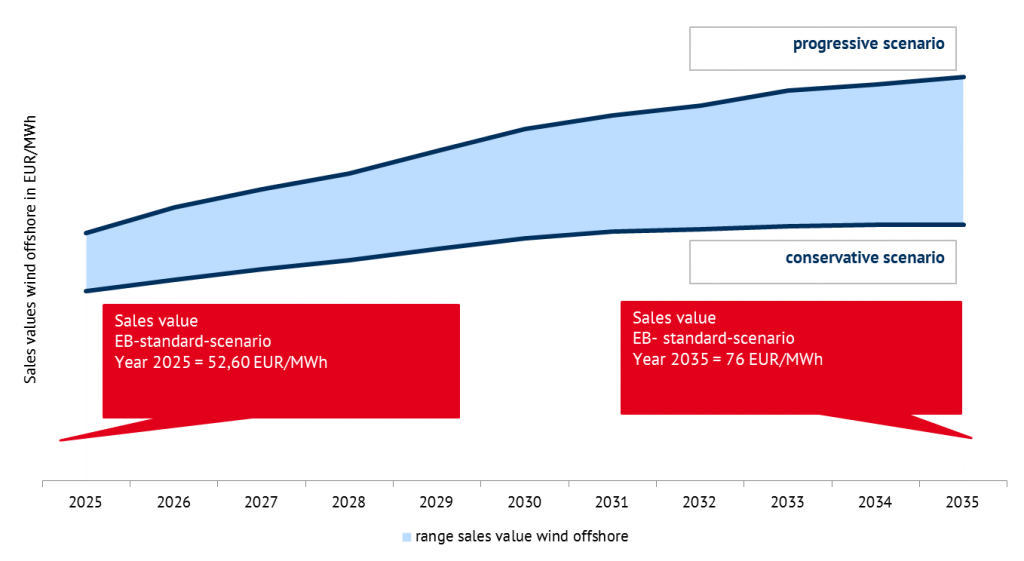 In the standard scenario, a wind power plant at sea can achieve average revenues of 52.60 EUR/MWh in 2025. According to experts, this can rise to 76 EUR/MWh by 2035. The average revenues are given in the indices “sales value”, developed by Energy Brainpool. Furthermore, the quantities which can be profitably earned by a non-subsidized plant must be taken into account. Subsidized wind turbines also offer at negative prices due to the fixed remuneration of the subsidy rate. Non-subsidized plants, on the other hand, switch off at negative prices in order to avoid losses. As a result of the large proportion of subsidized plants in the German electricity system, negative electricity prices are likely to occur more frequently in the future, according to the Energy Brainpool scenarios. For this reason, a non-subsidized plant has to switch off more frequently and cannot sell all quantities. This value is determined by Energy Brainpool as the “sales volume”. In the standard scenario, the sales volume amounts to 95% of the annual production during the years 2025-2035. This risk must be taken into account when looking at the revenues of non-subsidized renewable power plants.

A current white paper from Energy Brainpool explains various price indices for the assessment of electricity market revenues from fluctuating renewable energy sources and illustrates the specially developed parameter of the sales revenues.

The end of coal in the EU – at least partly