In August 2022, the energy market shows price records in short-term trading due to news about the Nordstream 1 pipeline. Price records are also set on the futures market. The traffic light coalition puts together a third relief package. The introduction of the gas procurement levy leads to a heated discussion.

In addition, a fundamental EU electricity market reform is to be launched. The tenders for second-segment solar plants were again signed significantly. Natural gas has a high share in the German electricity mix.

The third relief package of the German “Ampelkoalition”

At the end of August 2022, it had already become apparent that a third relief package was coming from the German government. The package was presented in the first week of September 2022 and brings with it some important innovations for the energy market as well.

On the other hand, the upcoming increase in the CO2 price for national fuel emissions trading will be postponed by one year to 1 January 2024. Normally, the CO2 price for fossil fuels such as petrol, diesel, heating oil and natural gas would already increase by five EUR/t on 1 January 2023. (source: Bundesregierung, tagesschau)

The ups and downs of the gas procurement levy

As early as the end of July 2022, the news was mounting with regard to a planned levy for gas customers. On 5 August, the regulation of the temporary gas surcharge came into force. The core idea of the levy is to secure the energy supply in Germany. Gas importers, who have to procure expensive replacements at short notice due to the curtailment of Russian supplies, are to be relieved of the burden. The extra costs incurred by the importers are passed on to all consumers. (source: tagesschau).

Due to sharp criticism from the FDP and SPD, the regulation is now to be revised. Federal Economics Minister Robert Habeck also promised to change the gas levy by the end of August. The change is intended to prevent companies from profiting from the additional payments of gas customers without economic need (source: tagesschau).

Decoupling gas and electricity prices could curb the continuing rise in electricity prices. For this reason, the German government announced on August 26, 2022, that it would examine this coupling – supported by the European Commission and Austria . The aim of the reform is to decouple end-customer prices for electricity from the rising price of gas.

Prices on the wholesale electricity market are determined by the deployment order of power plants offering on the electricity exchange – the merit order. The last power plant needed to meet demand sets the market price with its bid. As these are often gas-fired power plants, this leads to significantly higher electricity prices given the current high gas prices.

One possible intervention that is up for debate is the introduction of an excess profits tax, on the additional profits that electricity companies have made as a result of rising electricity prices. Here, it wouldn’t hurt to think outside the box. Spain and Italy already have taxes on excess profits, and Belgium, Austria and France are also considering such a move (source: tagesschau, zdf).

In response to criticism from various quarters, the Federal Ministry of Economics pointed out that the merit order concept remains unchanged. However, problematic effects of the merit order for electricity customers are to be changed. The high complexity of this reform requires a medium-term timeframe, as European partners and the European Commission must also be involved (source: zdf).

Once again clear signing of the tender procedure

For the second time this year, the tender procedure for second-segment solar plants took place. In order to participate in the tendering procedure, solar plants are subject to the following conditions. They must: be erected on, at or in a building or a noise barrier, have an installed capacity of more than 300 kWp and be located in Germany.

115 bids with a volume of 214 MW were received. The tendered volume was set at 767 MW, as in the first tender, and was again significantly undersubscribed. The average, volume-weighted award value increased by 0.31 cents to 8.84 ct/kWh. 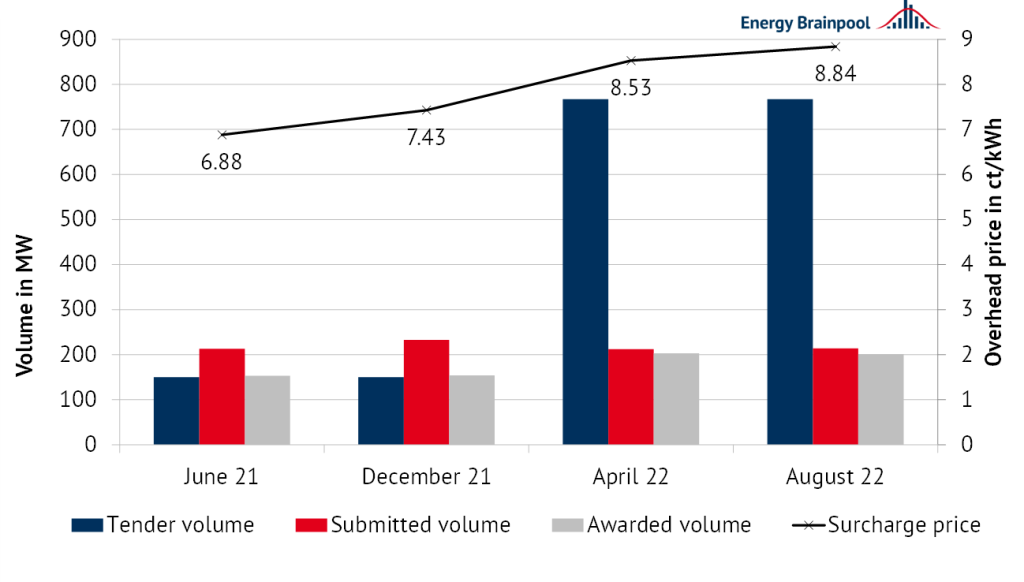 Figure 1: development of the tender quantity, the submitted quantity of the surcharge quantity and the average quantity-weighted surcharge value for solar plants of the second segment from June 2021 to August 22 (Source: Energy Brainpool, 2022).

It is easy to see that there has been virtually no change in the quantity submitted and, accordingly, in the quantity awarded compared to April. It therefore remains to be seen whether the additional third bidding round in December 2022 will show a greater deviation (source: BNetzA). The second bidding date for the innovation tenders in 2022, on the other hand, has been postponed from 1 August to 1 December 2022 (source: BNetzA).

Unexpected turnaround on the futures market?

The announcement of further maintenance work on the Nordstream 1 pipeline initially caused further drastic jumps in the price of gas. Gazprom is checking and maintaining a turbine again, from 31 August to 2 September. Following the announcement of the maintenance, prices on the futures market initially shot up by 10 per cent on 22 August. By the end of the month, a similar trend had emerged due to the uncertainties and was reflected in the prices. With an all-time high, the 2023 front year for TTF closed on 26 August at 310.60 EUR/MWh (source: Montel).

Since 29 August, however, the gas price has been moving sharply downwards. This is also due to the already well-filled gas storage facilities (source: Spiegel). Strongly influenced by the gas price, the electricity price has also reached exorbitant heights. On 26 August, the front year 2023 closed at an all-time high of 985 EUR/MWh. However, prices have dropped sharply due to the European Commission’s announcement of an emergency instrument to stabilise the electricity market.

The EUA December 22 lead contract initially gained momentum and reached an all-time high of 98.01 EUR/t CO2 on 19 August. However, persistent recession concerns, a weaker euro and the overall worsening outlook for the economy again caused a sharp loss by the end of the month (source: Montel). The percentage price development of the commodities can be seen in Figure 2.

High share of natural gas in the electricity mix

Renewables accounted for 44.8 per cent of net electricity generation in August 2022, about six per cent below the year-to-date average. However, compared to the previous year’s figure of 53.7 per cent, the share was significantly lower by 8.9 percentage points. The lower share in August this year is mainly due to weaker wind feed-in. Consequently, the net electricity generation volume of renewable energy sources in August 2022 was just under 17.6 TWh compared to 19.1 TWh in the previous year.

The relatively high share of natural gas in the German electricity mix in August of 11 percent is significantly higher than the value of 2 percent in the same month last year. On the spot market, the gas price for THE reached a record value of 314 EUR/MWh on 26 August. By 31 August, however, this had fallen again to just under 200 EUR/MWh.

Due to the high gas prices, the electricity prices on the spot market also moved sharply upwards. On 29 August, day-ahead electricity prices for Germany reached 871 EUR/MWh for the first time, fourteen times the average since 01 January 2015. Figure 3 shows electricity generation, consumption and the corresponding spot prices in August 2022. 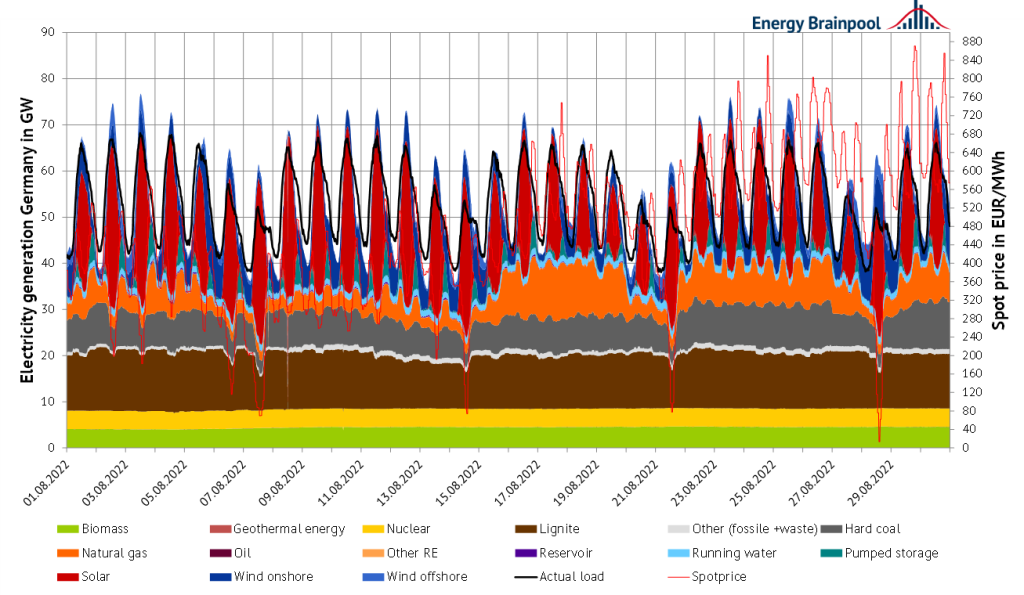 Are you wondering how exactly trading works and, above all, how these enormously high prices can come about? We recommend our live online training “Electricity Trading on Spot and Derivatives Markets” on 9 and 10 November, 2022 to answer precisely these exciting questions. (In German only)

And what else happened on the energy market in July 2022? Click here for the previous blog post.

No more woes on the gas market? A review of the current developments