With 8840 MW of wind power successfully approved by the end of 2016, this capacity could still be remunerated through the regular and fixed feed-in tariff. Only 5 percent of the approved capacity aims to take part in the tendering procedure.

Wind turbines that have been approved before 1st of January 2017 and which will feed into the power grid before 1st of January 2019 can still profit from the fixed feed-in tariff determined by the government and do not have to undergo competitive selection in the tendering procedure. Thus, it is little surprising that out of 8840 MW of approved capacity only 475 MW will go into the tender and the remaining 8365 MW take advantage of the governmentally-fixed feed-in tariff (Source: Erneuerbare Energien).

The expansion of wind power in Germany is thus bound to stay on a high level in 2017 and 2018 as well, where new record capacity additions could materialize. Eventually, in addition to the already approved capacities with secured feed-in tariff, there will be tenders for 2800 MW of capacity as well. Figure 1 depicts the gross capacity addition of wind power from 2014 to 2016 with actual numbers and estimates based on data from the German Wind Energy Association until 2019. Law suits against turbines could however lead to delays in the expansion. 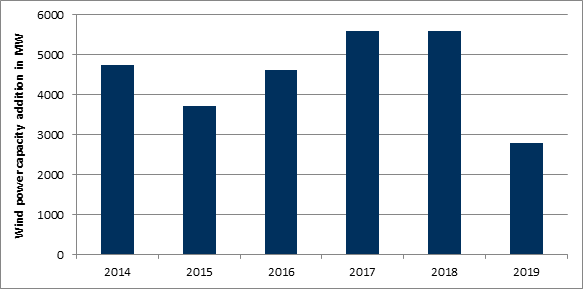 From 2019 onwards the further expansion will be primarly steered through tenders, where a maximum of 2900 MW will be awarded from 2019 onwards. The first tender for onshore wind has been opened by the German regulator in the beginning of March. The tendering date is the 1st of May 2017, where 800 MW with a maximum price of 7 cent/kWh will be tendered. As only 475 MW of the turbines approved until the end of 2016 will go into the tender, the entire wind power capacity taking part in the first tender might be lower than expected.

6. Symposium energy market of the future: well-known experts on current developments of the energy sector

Germany’s CO2-emissions: Between ambition and reality