Both the Germany Energy-Agency (dena) and the Federal Network Agency (BNetzA) show in publications that an increased expansion of renewables is necessary for an energy transition with sector coupling. News from the gas industry: Less gas from the Netherlands and market area consolidation. Prices at the long end stabilise in June and less wind raises spot levels.

Dena lead study and new scenario framework of the BNetzA

In the lead study “Integrated Energy Transition”, dena took a close look at the German energy system until 2050. The basis is a stronger sector coupling with electric cars, heat pumps but also synthetic fuels. A technology mix is cheaper than largely covering energy requirements with electricity. According to the results of the study, a 95 percent reduction in emissions can only be achieved through the controversial CCS/CCU (Carbon Capture & Storage/Carbon Capture & Utilisation) technologies. Dena also expects the demand for synthetic fuels to range between 150 and 900 TWh. A large part of this would have to be imported to Germany from abroad. Nevertheless, up to 15 GW of power-to-gas systems should be installed for testing and developing the power-to-x market. The authors also argue for an increase in the expansion corridor for renewable energies to reach around 180 GW onshore wind, 33 GW offshore wind and 160 GW photovoltaics by 2050. You can also find the study here.

The results of the new scenario framework for grid development planning 2030 of the Federal Network Agency also show that an increased expansion of renewables will be necessary if the 65 percent target for 2030 is to be achieved. The scenario framework describes the likely developments in the electricity sector. It serves as a basis for the determination of grid expansion requirements by the transmission system operators. In the most progressive scenario (C 2030), the BNetzA assumes 10 million electric vehicles in 2030 with an annual consumption of 25 TWh and 4.1 million heat pumps with an annual consumption of 29 TWh. Furthermore, 16 GW of large-scale power-to-heat plants with a consumption of 19 TWh will be installed. For power-to-gas, an additional electricity requirement of 9 TWh was determined for an installed capacity of 3 GW. The net expansion requirement for wind and solar thus amounts to around 4 to 5 GW per year by 2030.

What is the conclusion?

Despite all these scenarios, the so-called 100-day law with special tenders for wind and solar will only come into force after the parliamentary summer break. The same applies to the grid expansion acceleration law. At the BDEW congress, Economics Minister Altmaier therefore asked for a pause in order to reflect and then pass a law in the second half of the year that no longer needs to be “touched” (source: Energate). The political framework conditions currently do not support what is required in the scenarios.

The Coal Commission officially started its work on 26th of June 2018. According to Environment Minister Schulz, the first results, including the phase-out date for coal-fired power generation, are to be prepared by the end of the year. In contrast, Economics Minister Altmaier spoke of the Commission’s twofold mission: “It’s about climate protection, but also and quite prominently about jobs” (source: Energate).

It is therefore hardly surprising that expectations for the Commission’s deliverables differ greatly. For the environmental associations, a rapid phase-out of coal-fired power generation is the top priority, while trade associations speak of the need for a realistic policy.

Two working groups are to be established, one responsible for structural change and one for climate protection/coal phase-out.

Whether the growing climate protection gap for 2020 will play a role in the discussions within the 31-member Commission remains to be seen. At the Petersberg Climate Dialogue, the German government at least had to admit to an international audience that the goals for 2020 would not be achieved and that it had “its hands full” to do (source: SZ). As things stand at present, CO2 emissions will only fall by 32 percent by 2020 compared to 1990 levels, instead of 40 percent.

The number of bids for cogeneration plants declined. Only 14 bids with a generation capacity of 91 MW were accepted. The total tender volume of 93 MW was not fully utilised. With an average award value of 4.31 ct/kWh, the price level was above that of the tender in December 2017, but still well below the permissible maximum value of 7 ct/kWh. Homann, President of the BNetzA explains: “The calls for tenders have proven to be a competitive instrument for the determination of CHP subsidies.” Municipal utilities have secured most of the projects.

In the case of solar systems, the drop in prices in tenders seems to have stopped for the time being. The average award value in the last tender was 4.59 ct/kWh and thus 0.26 ct/kWh higher than in the February round. Nevertheless, the PV tender was significantly oversubscribed with an input volume of 360 MW, but only 183 MW of awarded projects. Since 2015, the price level has roughly halved from 9 ct/kWh to now well below 5 ct/kWh. The Hamburg project developer Enerparc was the winner of this tender with 15 of the 28 successful bids. Figure 1 shows the average award value for PV tenders since April 2015. 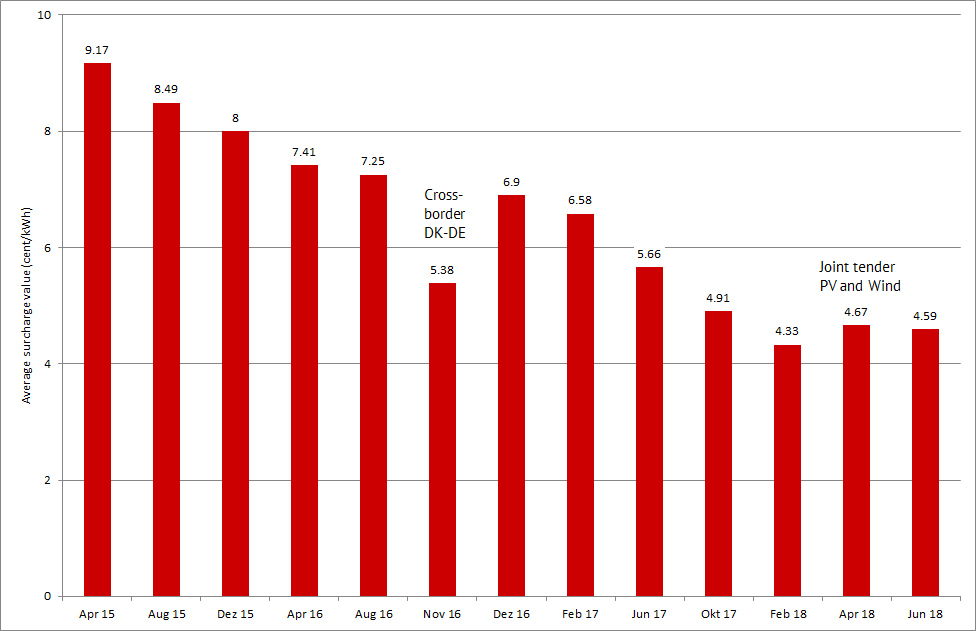 The International Energy Agency (IEA) expects global demand for gas to increase by 1.6 percent per year. This can be seen in the current gas market report “Gas 2018”. The largest additional demand will come from China, which will replace Japan as the largest gas importer in 2019. Global demand for gas is expected to increase to 4100 billion cubic meters by 2027. The IEA also sees LNG continuing to gain ground and forecasts an LNG share of 40 percent of the world market by 2023 (source: IEA).

In the Netherlands, on the other hand, there will be no more permits for new gas fields. This was explained by Economics Minister Wiebes. In addition to the large field in Groningen, the Netherlands has about 240 other small gas fields. Production from these fields is to fall below the 10 billion cubic meter mark by 2030 at the latest. For the production of L-gas from the field near Groningen, the government has also decreed that the security of local residents takes precedence over the security of supply for the general public (source: Energate).

Final details at the end of November 2018

To facilitate the conversion and change in the Groningen region, Shell and Exxon Mobile, who are exploring the Groningen field together, are providing EUR 500 million (source: Energate). The premature phase-out of L-gas production leaves a gas volume of around 450 billion cubic meters with a value of EUR 70 billion in the ground.

Another news from the gas market: The two German market areas will merge on October 1, 2021. This is what the transmission system operators have agreed with the BNetzA. It is now necessary to make the merger dialogue transparent with the market participants (source: ZfK).

The costs for network and system security measures for 2017 have risen to a record high of EUR 1.4 billion. Thus, the record year of 2015 with costs of EUR 1.1 billion has been exceeded. The increase was due in particular to weather conditions and the high expansion of wind energy in the past year.

One thing is certain: The transfer of residual electricity volumes to nuclear power plants in the grid expansion area will tend to increase rather than decrease the costs of grid interventions.

After the big price jumps in April and May 2018, both coal and CO2 certificate prices fell at the beginning of June. CO2 fell to below EUR 14.5/ton, while coal suffered a loss of more than USD 15/ton to below USD 85/ton. Accordingly, the prices for the annual baseload electricity band for Germany were also rather stable and fluctuated between 40 and 42.5 EUR/MWh in June 2018. Only towards the end of June did the results of the OPEC summit (only a small increase in production) lead to an rising price from USD 71 per barrel to USD 77 per barrel. In the course of this, the other commodities also moved along and reached values similar to those at the end of May by the end of June. Figure 2 shows a comparison of the price development for oil and for the delivery of baseload electricity in Germany for 2019.

On the short-term side, the low wind input was particularly noticeable. This led to an overall high level in the spot market for electricity. It almost scratched the daily threshold at 50 EUR/MWh several times. However, the high PV feed-in counteracted the high price level on many days.

Only the days from June 21 to 25, 2018 were also characterized by higher wind feed and thus lower spot market prices. Figure 3 illustrates this. Furthermore, the re-commissioning of the Emsland nuclear power plant on 12th of June following the annual inspection is visible. This is particularly reflected in the lower production from coal-fired and lignite-fired power plants. There were no negative prices in June 2018.

Electrolysis gases of renewable origin – on the way to competitiveness