According to the Federal Network Agency (BNetzA) 20 GW of the German conventional power plant capacity also feeds electricity into the grid during times of negative electricity prices, due to technical restrictions. Lignite-fired and nuclear power plants constitute the bulk of this inflexible base (70 percent), which ended up losing money during negative prices and where not necessary for guaranteeing grid stability.

The reasons why conventional power plants run in times of negative prices are diverse. According to a BNetzA survey of plant operators, 78 percent of feed-in is dictated by technical power plant restrictions. Another important reason is combined heat and power (CHP) as many conventional plants also have to supply district heat or process heat to consumers. Figure 1 shows the minimum generation and the conventional generation base (conventional generation due to technical plant restrictions or heat delivery) in specific hours of those days with negative prices considered by the BNetzA. 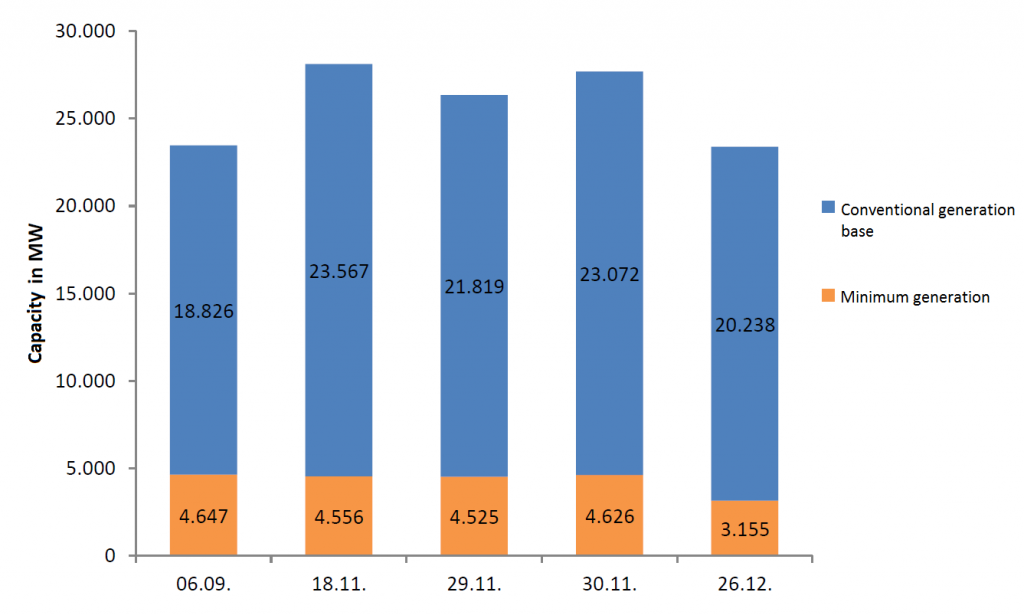 The overall conventional production base ranged between 18.8 GW and 23.6 GW, as shown above. The minimum of generation settled from between 3.2 GW to 4.6 GW. Furthermore, the report shows that especially nuclear and lignite-fired power plants had to feed in due to technical reasons. These plants accounted for 69 to 73 percent of the total conventional feed-in capacity present on the grid. The proportion of hard coal and natural gas correspondingly accounted for 22 to 27 percent.

According to the report the provision of negative control power by conventional power plants makes up a significant proportion of the minimum generation. However, the BNetzA assumes that wind power plants will make a significant contribution to the provision of this system service in the future. Moreover, due to the nuclear phase out, 7 GW to 9 GW of inflexible generation capacities will be eliminated during the next 4 years (Source: Montel).

Jochen Homann, president of the BNetzA, sums up: “Approximately one quarter of the power plants in Germany, which feed into the grid during peak demand, does not react or only reacts to a limited extend to prices at the electricity market. However, only a small part of this production is required due to grid-related reasons.”

The end of coal in the EU – at least partly

Weekend and 1st of May result in record low electricity prices